Why did I overlook the simple?

Author: Mike VE9KK
Back in November 2017 I ordered and built the Funk Amateur FA-VA4 antenna analyzer kit. The kit was built and passed the smoke test without issue. I then went through the calibration process and it was successful (so I thought). I was not able to get the unit to work and I felt it was due to user error and tried to run the calibration again but without success. No matter what band I checked the SWR was off the scale. I even connected the device to a dummy load without success. I read and reread the manual and even checked out some YouTube videos and was just getting more frustrated so I was thinking of selling it to someone who knew how to operate the unit. As I watched more Youtube videos it seemed like a very straight forward unit to operate. Over the course of a year or more, I picked up the unit and tried to figure it out but just could not.
This past week I picked it up again and was looking it over but in so doing for some strange it occurred to me to open up the kit and look over my work. It's embarrassing to say but as I looked the board over I saw that the female BNC connector  I did not solder the BNC center pin to the PCB board!!! I soldered this pin, did a reset to the unit and then ran the calibration again BUT this time the calibration took a lot longer. Once it was done I connected it to my Endfed antenna and checked 15m this is a band that I know the SWR is decent. Low and behold the unit worked as it should way back in 2017!! I just can't believe that I overlooked the obvious to open the kit up and have a look around. I now get to discover this great unit that I built years ago.

This is a list I maintain of available radio kits on the Internet.

Feel free to suggest any that I missed. 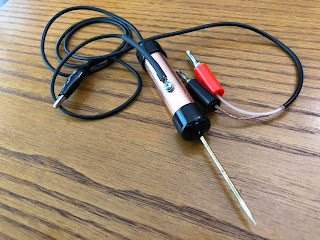 When the bands are slow it's time to build a kit! I have had this RF probe kit from  Pacific Antenna that has been gathering dust and just this past weekend I decided to put it together. It's a very simple and easy kit to build and can prove to be a useful tool as well. The circuit board was simply a cap, diode and resistor. It sure was nice to get the soldering iron out and again! This mini kit is nothing
compared to the Elecraft k2's I have built in the past. It did get me thinking that when I retire in a year and a half and if the kits are still available another K2 kit would be a nice way to pass the time in retirement. This kit went very fast but I did take my time with it as I really enjoyed getting back into the kit building again. I did find with this kit the provided jacks that are used to plug into your multimeter were not a solder type but held the test leads in via a screw. In the past I have had issues with these loosening off. I went to my trusty "this and that" pile and found two solder type and subbed those in. I have yet to use the RF probe but it was a fun little project.

Some of you might remember me talking about the return of Heathkit.

There has been a lot of mystery surrounding the status of Heathkit, as they popped up a couple of years ago and announced that they were returning.  There was a survey posted online for a long time asking people what they wanted to see from a new Heathkit.  The new Heathkit management hosted a Q and A session on Reddit speaking more about their plans to return.  Then, nothing.  No announcements, no news.  There was brief mention in December when the folks at Adafruit (a company that supports the MAKER community) were briefly in touch with the new Heathkit, and were told that things are still progressing, and there will be no information on what the products will be until they are ready.  All through this, I have been skeptical, as many people would be, since we have heard this story before.

Now, there are changes over at Heathkit.com.  They are clearly gearing up for products, and support.  They have even started an eBay store where they are selling parts, and some classic equipment.

A good afternoon on the radio

Author: Mike VE9KK
Today I took the chance to clean up the radio desk a bit, now that the LP-100A has been removed from the desk and sold I had a chance to rearrange things. I find it so funny that I remove one coax jumper at a time, then move a device  and re-attach the coax jumper and having done this to about 4 radio devices somehow I still end up with something going not where it should. I then have to trouble shoot things to get them back to "normal". Well things are working again and the shack/roll top desk is a little more organized. It was now time to get on the radio and see what was happening out there. I started out on 17m and came across W1AW/5 calling CQ I decided to drop my K3's power down to 500mW's and see how I did. I was able to snag him on the first call which meant it was a 2,211 miles per watt contact!
I then slipped over to 15m and came across V5/DK1CE calling CQ he was running split and it's not very often I try the split thing. It was only once before I was able to make a contact running split. I gave him a go and with about 2 repeats I was able to get into Namibia with 5 watts! I was thrilled to not only make a contact operating split but also to have my MFJ 1788 loop antenna with 5 watts make the trip.

Recently, a number of hobby radio magazines have either retired, or have merged into a digital mix of several. Filling that void is the new The Spectrum Monitor, a creation of Ken Reitz KS4ZR, managing editor for Monitoring Times since 2012, features editor since 2009, columnist and feature writer for the MT magazine since 1988. Ken offers this digital, radio communications magazine monthly.  The web site is at http://www.thespectrummonitor.com/

Ken, a former feature writer and columnist for Satellite Times, Satellite Entertainment Guide, Satellite Orbit magazine, Dish Entertainment Guide and Direct Guide, is also contributing editor on personal electronics for Consumers Digest (2007 to present). He is the author of the Kindle e-books “How to Listen to the World” and “Profiles in Amateur Radio.”

The Spectrum Monitor Writers’ Group consists of former columnists, editors and writers for Monitoring Times, a monthly print and electronic magazine which ceases publication with the December, 2013 issue. Below, in alphabetical order, are the columnists, their amateur radio call signs, the name of their column in The Spectrum Monitor,  a brief bio and their websites:

Past president and currently treasurer of the Radio Amateur Satellite Corporation (AMSAT). Freelance writer and photographer on amateur space telecommunications since 1993. Columnist and feature writer for Monitoring Times, The Canadian Amateur and the AMSAT Journal. Web site: www.kb1sf.com

Reporting on radio’s lower extremes, where wavelengths can be measured in miles, and extending up to the start of the AM broadcast band. Since 1991, editor of “Below 500 kHz” column forMonitoring Times. Author of Listening to Longwave (http://www.universal-radio.com/catalog/books/0024u.html). This link also includes information for ordering his CD, VLF RADIO!, a narrated tour of the longwave band from 0 to 530 kHz, with actual recordings of LW stations.

Author of the Monitoring Times “Digital Digest” column since 1997, which follows the habits of embassies, aid organizations, intelligence and military HF users, the digital data systems they use, and how to decode, breakdown and identify their traffic. Web site: www.chace-ortiz.org/umc

Authored a regular monthly column about radio restoration and history since 1986. Originally writing for Gernsback Publications (Hands-On Electronics, Popular Electronics, Electronics Now), he moved his column to Monitoring Times in January 2000. Editor of two publications for the Antique Wireless Association (www.antiquewireless.org): The AWA Journal and the AWA Gateway. The latter is a free on-line magazine targeted at newcomers to the radio collecting and restoration hobbies.

Tomas first discovered radio propagation in the early 1970s as a shortwave listener and, as a member of the Army Signal Corps in 1985, honed his skills in communications, operating and training fellow soldiers. An amateur Extra Class operator, licensed since 1990, you’ll find Tomas on CW (see http://cw.hfradio.org ), digital, and voice modes on any of the HF bands. He is a contributing editor for CQ Amateur Radio (and the late Popular Communications, and CQ VHF magazines), and a contributor to an ARRL publication on QRP communications. He also wrote for Monitoring Times and runs the Space Weather and Radio Propagation Center at http://SunSpotWatch.com.  Web site: http://nw7us.us/  Twitter: @NW7US  YouTube: https://YouTube.com/NW7US

Lifelong air-band monitor, a private pilot since 1968 and a commercial pilot licensee since 1983, amateur radio licensee for more than 40 years. Air-band feature writer for Monitoring Times since 2010.

Amateur radio operator since 1960. Retired after 40-plus years involved in mobile communications/electronics/computers/automation. Active in radio astronomy for over twenty years, specializing in meteor monitoring. Wrote the “Amateur Radio Astronomy” column for Monitoring Timessince 2010. A member of the Society of Amateur Radio Astronomers (SARA). Web site: www.RoswellMeteor.com.

Founder and director of the charity Ears To Our World (http://earstoourworld.org), curator of the Shortwave Radio Archive http://shortwavearchive.com and actively blogs about short­wave radio on the SWLing Post (http://swling.com/blog). Former feature writer for Monitoring Times. 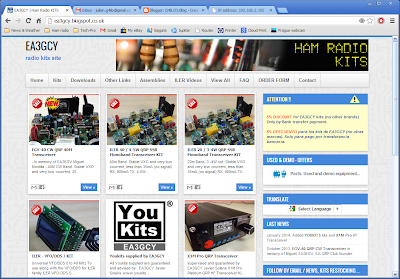 Javier Solans, EA2GCY, maker of the Iler 20 and 40 kits is now selling a range of kits from YouKits. The new kits are already listed on his very impressive-looking web site. If this means that the Chinese-made kits will now have building instructions to the same high standard as Javier’s own kitsit is very good news for kit-builders.