Avoid the Loopy-ness of HF Loops

In reworking a wire antenna around the edge of my shingled roofline that was installed 10 years ago as a (mostly) horizontal HF loop, I discovered a couple of things. After applying them successfully and preparing a draft of the principles, procedures and results, Don G3XTT decided to publish my work in the March issue of Practical Wireless magazine. Thomas K4SWL, Kirk NT0Z, and Scott K0MD gave me valuable advice on this journey.

One is that the current ARRL Antenna Book mainly parrots the wisdom of “just use 450-ohm ladder line and you’ll be fine.” Usually. OK, that’s the Cliff Notes version and they do have more to say than that. But they repeat that Philosopher of Knoxville, Larry Cebik, in his well done set of antenna models for HF loops as the main source of this wisdom. L.E. Cebik, to the surprise of many hams, was not an engineering faculty member at the University of Tennessee but a Professor of Philosophy. A good one at that.

The new English translation of Rothamel’s Antenna Book had references! It’s a more thorough and deep-dive treatment of HF loop antennas. It’s “grounded” in the published literature which “bonds” things together in terms of the reader’s comprehensive of what has been published about these HF antennas. (Sorry for the Ward Silver puns here!)

A second is that the problem with doing what most antenna texts say, measure the impedance of an antenna at the feed point, is that the loop needs to be up in the air where it’s going to be installed. This is a far climb on a ladder with an antenna analyzer!

It dawned on me that the new era analyzers with bluetooth connectivity that are light weight offer a way to measure the feed point impedance at the “bare wire” ends of the loop while keeping one’s feet on the ground. Here I am on a step ladder with my Rig Expert Stick Pro with a banana plug adapter to the bare wire ends of a loop being installed at Clay AC5Z’s house among four tall pine trees. I’m making sure that my iPhone has a good bluetooth connection to the analyzer before I attached the second bare wire end to the banana plug and let AC5Z hoist it up to it’s intended height above ground.

We used Clay’s IC-7300 set at the lowest power output (5w) to run a WSPR beacon for 12 hours on most HF bands. Below are displays from WSPR.Rocks for the fundamental 80M band (pounding Eastern Europe over night!), 20M (Europe, Australia and vicinity, Hawaii) and the 10 & 12M bands (getting to Australia and Japan).

This particular loop is nearing our final optimization. It can be optimized a bit more by raising the balun wind from 4:1 to 6:1 and taking about 3 feet off of the bare wire. This should situate the 80M band to Clay’s liking and bring the higher harmonics more into line with those bands, too. It seems to be working from the test phase.

I’ll cover it and perhaps another one being planned for Mike N5DU’s house soon. Read about the process I’m using in the March issue of Practical Wireless magazine. I cover it in detail for the loop at my HOA-based residence that didn’t just follow the conventional wisdom. It got a much improved optimization. Even being matched to 160 meters for an 80 meter fundamental design frequency!

Frank Howell, K4FMH, is a regular contributor to AmateurRadio.com and writes from Mississippi, USA. Contact him at [email protected].
» Leave a Comment (4)

Propagation prediction for 3Y0J on Bouvet Island
Regardless of what band you’re on, look for sunrise and sunset times for Bouvet and your own location.
EI7GL

Device transmits radio waves with almost no power
A new ultra-low-power method of communication at first glance seems to violate the laws of physics.
The Conversation

Michigan: The first state to issue a Ham license plate
The first plates with Ham call signs on them were issued in Michigan for 1939.
KB6NU

Ham Radio and the Cult
The ARRL was not exactly enthusiastic about the operations from Jonestown.
KE9V

A magic ground mobile antenna
I mount one of my two portable vertical antennas on a short aluminum pole which in turn is mounted on the hitch of my truck.
Ham Radio Outside the Box

AntRunner: Testing a low cost satellite antenna rotator
Overall the AntRunner works as expected and was easily able to follow HRPT satellites across the sky.
RTL-SDR.com

Rescued by Ham Radio
The story of a roadside rescue thanks to a Ham Radio Operator.
WMUR

Talking to ChatGPT over DSTAR
A quick proof of concept connecting ChatGPT to Amateur Radio.
YouTube

Angry Radio Relay League
A talk with an ARRL Director under the gun for an alleged ethics violation.
Ham Radio Now

Get Amateur Radio Weekly in your inbox.

Amateur Radio Weekly is curated by Cale Mooth K4HCK. Sign up free to receive ham radio's most relevant news, projects, technology and events by e-mail each week at http://www.hamweekly.com.
» Leave a Comment (0)

January is now in the rearview mirror and weather wise there was a mix of very warm weather (for January) of plus 12C, days with freezing rain and the occasional snowstorm of 37cm. I had a good month for radio, I was involved in some contests, WRTC competition more on that in another post. Then just some good all-around DX AP5A Barbados, S01SW Western Sahara, 5B4AMX Cyprus and CO8NMN Cuba.

The space weather has been fantastic of late with some very surprising openings on 10m. Now into February by 2 days we have had cold weather. Last evening it was -25C and on Friday evening -30C with a wind chill of -47! I am staying indoors so bring on the DX!!

Mike Weir, VE9KK, is a regular contributor to AmateurRadio.com and writes from New Brunswick, Canada. Contact him at [email protected].
» Leave a Comment (2)

Well this was a first for me! 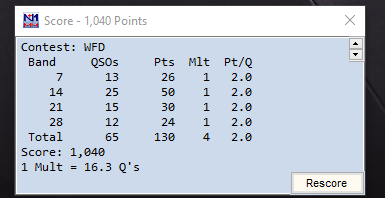 Most any Ham you talk to have heard or taken part in Field day that takes place each year in the summer. Over the years I have read blog posts regarding Winter Field Day but had not paid too much attention to it. I am not one to spend time outdoors in the winter on the radio. Winter is nice but not that nice, but this year I did some reading and there is a category for working this event from home! Now my wife did give me some advice telling me to at least open the window and rough it a bit with some cold air. Sorry, not for me I am a summer/warm-weather guy!
I entered CW only as my category and I found the event well attended and very relaxed compared to major CW contests. It is an event that I will add to my contest calendar for next year.

Mike Weir, VE9KK, is a regular contributor to AmateurRadio.com and writes from New Brunswick, Canada. Contact him at [email protected].
» Leave a Comment (2)

In this episode, we join Martin Butler M1MRB, Dan Romanchik KB6NU, Edmund Spicer M0MNG and Ed Durrant DD5LP to discuss the latest Amateur / Ham Radio news. Colin Butler (M6BOY) rounds up the news in brief and in the episode's feature is Workshop Experiments.

We would like to thank Martin Malley (WØZZK) and our monthly and annual subscription donors for keeping the podcast advert free. To donate, please visit - http://www.icqpodcast.com/donate

Colin Butler, M6BOY, is the host of the ICQ Podcast, a weekly radio show about Amateur Radio. Contact him at [email protected].
» Leave a Comment (0)

Director Ria Jairam recused by ARRL, and it seems political to me
Ria discussed the issue with me, and this is my understanding.
Bruce Perens

Innovation on Morse Code for US Military
In 1991 this system revolutionized the training of Morse code copying skills for both students and instructors.
SOFREP

The Meteor M2 LRPT weather satellite has failed
Meteor M2 is a Russian meteorological satellite whose LRPT transmissions at 137 MHz were relatively easily received by anyone with a simple satellite antenna.
RTL-SDR.com

BBC Lights Out
A man, a mouse and a morse key: The story of a Radio Amateur in Kyiv.
BBC Radio

POTA-expedition?
There are still quite a few POTA sites that have never been activated.
AE5X

I fell off the QRP wagon and regret it already
Here is the backstory of my most recent park activation and how I got it all wrong.
Ham Radio Outside the Box

Pros and cons of HF attic antennas
Want to work more than a single band? Parallel/fan dipoles are a good solution.
OnAllBands

Downloading images directly from weather satellites
This is an introductory video to a series that will show you how you can do the same.
YouTube

Get Amateur Radio Weekly in your inbox.

Amateur Radio Weekly is curated by Cale Mooth K4HCK. Sign up free to receive ham radio's most relevant news, projects, technology and events by e-mail each week at http://www.hamweekly.com.
» Leave a Comment (3)