Slow time on the bands. 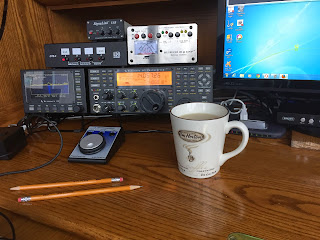 I took an extra few days off over the Easter weekend with the intention of getting some solid radio time in. As it turned out the only day I had was yesterday afternoon most likely because I knew my vacation was coming to an end and the plan was to get on the rig! I was planning on doing some JT-65 as with the solar conditions not so great and my 5 watts signal to boot it seemed to be the logical move. Before getting on the radio I looked up a website called Band conditions. This is a very nice site that gives you up to date band conditions via nice easy to read bar type graphs. Each HF band is displayed and is update automatically every 30 seconds. There is an arrow for each band graph that is either in the Red, Yellow or green portion of the bar graph……you can guess what color means what. Seeing that 20m and 30m seemed to be the go to bands I booted up WSJT-X and ended up finding 30m not so great but 20m was booming with lots of European stations.  Unfortunately my calling CQ was not being answered. I did check with PSK reporter and my signal was being spotted all over the U.S as well as some places in Europe.  I then closed down WSJT-X and opened Fldigi and now the plan was to give PSK 31 a whirl on 20m. I was not disappointed as there was lots of signals in the waterfall. After spending about 45 min’s on the band I only was able to get the attention of one Spanish station to hear my QRP signal……BUT conditions seemed to change and we never completed the QSO. One thing I took away from the time on the radio is that I have to review what PSK-31 macro’s and simplify some and rename some of the buttons to make them more user friendly to me.

Author: Andrew MØNRD
This weekend I finally got around to sorting out my digital/data mode interface for the Yaesu FT-857D.

To transmit and receive digital/data modes you need to connect the radio audio in/out to the computers sound card in/out, the computer then runs the necessary software to encode/decode the signals. I want to try out WSPR, PSK, JT65 and some SSTV for starters I have spent too long just receiving and decoding...

There are a number of inexpensive commercial interfaces available, but many of them use the same basic design originally intended for eQSO/Echolink operation. I nearly succumbed but I had built an eQSO interface many years ago when using PMR446 and had most of the parts to build another.

I nearly took the easy route and got a commercial one since connecting up some home built circuitry to a £20 hand held is slightly less daunting than plugging it into an expensive rig!  My original interface has been modified and reused over the years and was a bit of a mess, but being brave I decided I could tidy it up and I couldn't really damage anything if I took my time... actually the truth was I discovered I didn't have the necessary optocoupler IC so couldn't build a new one just yet...

A simple internet search for digital/data mode interfaces will bring up a great deal of information, schematics and ideas for home brew solutions. The basics can be found here for example.

The simplest form of interface is just a simple direct lead with the transmitter operating in VOX mode. However levels can be a problem as the line/speaker output from a computer can be too high for a transmitters microphone input. Also connecting a radio to a computer directly can lead to problems with ground loops and interference.

The computer can be made to control the Push-To-Talk (PTT) on the transmitter using a serial port with the software controlling one of the handshake lines (RTS/DTR) Some data mode software support CAT to allow control of the PTT as well as tuning the transmitter, but the serial port method is more universal.

The preferred interface, and the one I had built isolates the computer from the radio by using two audio transformers and an optocoupler. There is no direct connection between the two devices so keeps interference to a minimum.

I could have used the microphone and speaker output on the radio, but the FT-857D has a convenient data connector on the back. This is a 6-pin DIN socket as used by older (PS/2) computer keyboards/mice. Note the diagram shown in the FT-857D manual (as below) is the view as you look at the socket.

The connector has two "data" outputs but they are simply fixed level audio outputs from the receiver. The one of interest for most modes is the 1200 baud output (the 9600 baud output is more akin to a discriminator tap and is only of use for FM packet) There is a data-in (TX-audio) and a PTT control line.

Like many people I initially thought I could cut a lead off a mouse/keyboard and repurpose it, however I discovered most only use four wires and they don't use the necessary pins! You might be lucky especially with older keyboards or alternatively if you have an old keyboard extender cable they usually have all six wires present. Alternatively the plugs are readily available from the likes of CPC/Farnell.

I had a hunt around in a junk box and located a suitable keyboard extender cable. I chopped off the useless end and metered out the pins to identify the appropriate wires. Remember when looking at the plug the pins are swapped left-to-right compared to the diagram which is the socket view.

Well here is the insides of the interface.. and as you can see I completely failed to tidy it up! Not my best work, but I did put it in a new box and I did tape up all those unused wires!

One annoying issue I had was the audio from the computer wasn't getting to the radio, it worked and scoped out okay when out the box, but in the box it stopped working. I suspected a bad solder joint and redid them all, but still showing the same intermittent issue. I did notice flexing the board slightly out the box cause the fault and soon located a track on the vero-board which appeared to have a hairline crack, I couldn't see anything obvious but a wire soldered along it cured the issue.

I soon had it connected up and fired up WSPR


It was straight forward setting up WSPR to use a combination of CAT for tuning and the RTS PTT control and soon had some encouraging results, in fact these are some of the spots of my 5W signal on 10m/20m and 30m, I was grinning from ear to ear!

I had simply set up the FT-857D for basic USB transmission, however it does have a dedicated DIG mode, the manual refers to setting it up for RTTY/PSK, I very briefly had a go with PSK31 and Digipan and was successfully decoding signals and put out a few CQ calls (again on 5w) but got no immediate response. However checking PSK Reporter later it seems I had been heard by VC3S, OH1FOG and ES1JA maximum distance was around 3260 miles

Looking forward to spending some more time experimenting with the data modes.

I don’t often look for PSK warbles on 6m but am glad I did this evening. Obviously others were looking for someone as well I1YTO and I ended up having a brief QSO before he faded away again, up to 599 then down to nowt in a matter of seconds. Nice whilst it lasted