Practical Wireless with the LM386 unleashed 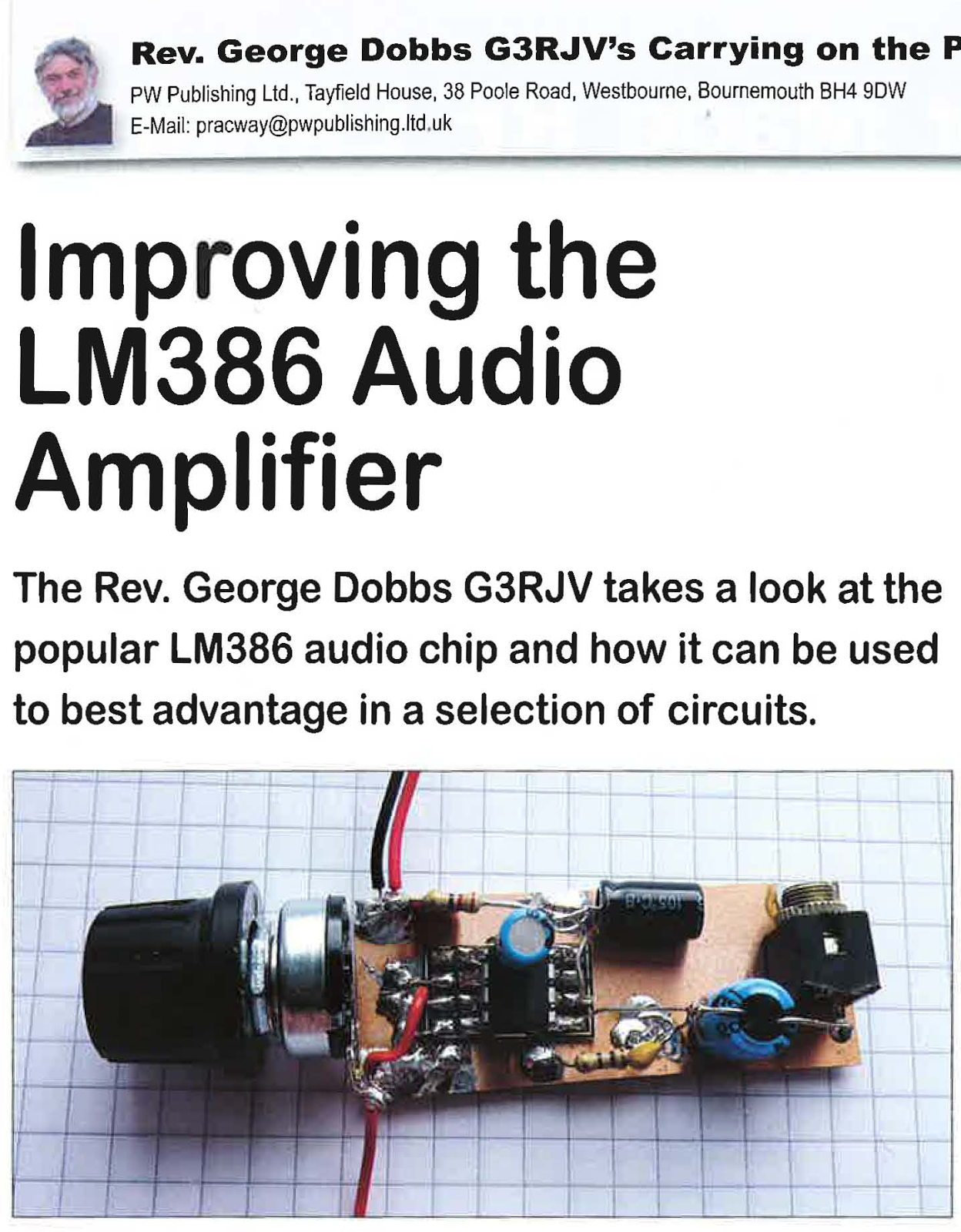 “Improving the LM386 Audio Amplifier” is the title of always inspiring Rev. George Dobbs G3RJV’s column in this month’s Practical Wireless. George talks about the basic amplifier with a voltage gain of 20 (26 dB) and how it is straight forward to increase gain to any value up to 200 (46 dB). The article then shows how it can be built dead-bug style.

Then he goes on to talk about various ways to improve the circuit such as for hiss reduction and even higher gain. In that connection he also mentions my article “Unleashing the LM386” from SPRAT in the Autumn of 2003. That circuit was an enhanced version of the high-gain circuit of Kazuhiro Sunamura JF1OZL. Basically it increases the gain to up to more than 70 dB, enough for it to drive a loudspeaker. My circuit also adds bandpass filtering. All this is achieved by adding only 5 passive components to the basic amplifier. The circuit was recently revisited in SPRAT by Johnny Appel SM7UCZ. He added a 40 dB Darlington pair preamplifier for even further gain.

The bandpass filtering (not low pass as the article says) is due to the series resonance of 100 uF and 1 mH which happens at about 500 Hz making it a nice CW filter.

It was good to see my article revisited as I think the idea deserves to be better known and to be considered in more LM386 amplifier circuits. The same goes for the improved muting circuit of the LM386 using pin 7. I developed both in the period when I was interested in minimal transceivers like the Pixie 2 and in true QRP spirit was interested in how to achieve much with as few as possible components.

One thing which is not mentioned in Practical Wireless is that the circuit may be used in such a way that it really squeezes out every grain of amplification of the poor little LM386, so the warning I wrote when I wrote an introduction to “Unleashing the LM386” for the blog (see link below) is worth repeating: 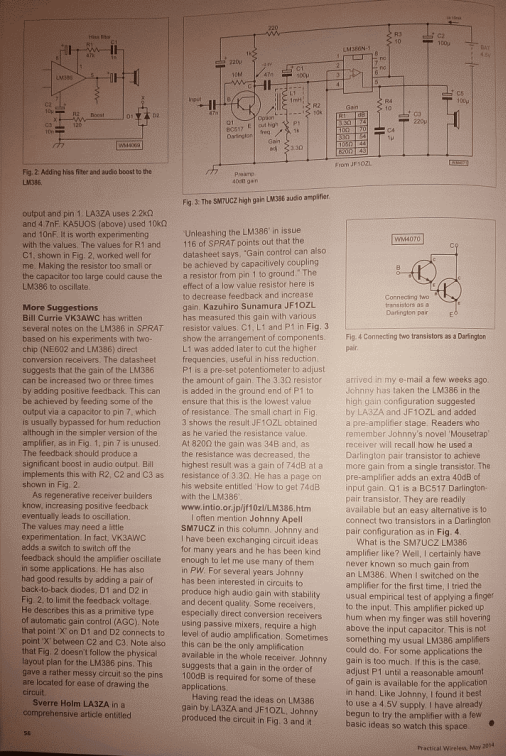 One word of warning is prudent here. As the 200 ohm pot approaches zero ohms, the amplification becomes so large that the series resistance of the 1 mH inductor and the ESR (equivalent series resistance) of the 100 uF capacitor in combination with the open loop gain of the LM386 will determine gain. Some of these values are unspecified for standard components and may vary a lot. Therefore such a setting is not recommended for use in mass-produced circuits. However for a hobbyist’s one-of-kind circuit it should be fine.

A poor copy of the last of the three pages of the Practical Wireless article, where the high gain options are discussed, is shown.

I like to build small electronics projects and like many others I have found the small Altoids tins to be excellent enclosures.

These tins are inexpensive, well shielded, easy to work with, and least but not least they enable you to make experimental circuits that are sturdy enough that they can be reused later.

Pictured here is a collection of projects I have built over the years with the hope that  they may inspire others.

In the next picture there are some more projects:

Here are some resources with tips:

Added 17. September: Several of the comments on the page at Dangerous Prototypes are concerned with the difficulty of finding Altoids tins in many places of the world. That goes for Norway also. I have been lucky enough to have a job that allows me to travel to the US from time to time and then I have bought some. Ideas for local alternatives are needed!