Author: Larry W2LJ
I know I promised the 2015 NJQRP Skeeter Hunt Scoreboard would be published today, so my recounting of my busy weekend isn't an excuse for not doing that. Actually the spreadsheet has all been compiled and is up on Google sheets, but is being held private for the moment.  I got an e-mail yesterday from Randy KB4QQJ. He had submitted his results last week and did not receive the confirming e-mail from me ...... and that would be because I never received them. So I asked him to re-send ASAP and I will post the link later today or tonight, either way.  If I have to change things around due to his entry after the initial posting, I will - but something will definitely appear at some point later today. From his brief e-mail to me, I don't think his entry will affect the top five finishers.

The weekend was busy chore-wise. And normally, I wouldn't consider that such a great thing. The HF bands have been so crappy, though, that at least I've been too busy to bang my head against that ionospheric brick wall.  The few times I did turn the KX3 on for a few minutes, I thought both my antennas had disappeared, with one exception I will talk about later.

I spent Saturday mowing the lawns, front & back, as well as completing all the trimming in the backyard. It's kind of amazing how much lawn I've reclaimed by beating off and cutting back all my neighbors' flora overhang from my two side fences. Not only does the backyard look bigger now, but mowing the lawn will be easier. Each time I got near the fence on each side of the yard, I was being treated to whaps in the face by low hanging bush branches encroaching from their yards. Not a problem now!

On Sunday, I had the great honor and immense pleasure to be interviewed by Eric Guth 4Z1UG for an upcoming installment of his "QSO Today" podcast. I have no idea when it will actually be released, but someday soon you'll be able to hear my voice and you'll suddenly realize why I've stayed a CW guy all these years!

All kidding aside, it was a fantastic experience. Eric is a warm and friendly person who immediately puts you at ease. It was just like having a QSO with a dear, old friend. The interview lasted for close to an hour, but it felt more like five minutes. Eric has done a lot of really cool podcast interviews with a lot of deserving and interesting Amateur radio ops, so why he selected me is anyone's guess. But you should do yourself a favor and follow the link I provided and listen to some of them. He's performing a great service to the Amateur Radio community by providing fascinating conversations for us to listen to. This series kind of reminds me of the old Edward R. Murrow "Person to Person" TV show, but on an Amateur Radio basis.

After I finished up with Eric, I dove into cleaning up the shack. I'm not proud to admit that over the past few months, it became a dumping ground and a pig sty (however, I am Flying Pig #612, so maybe that's appropriate?). I ended up spending about three hours, cleaning, organizing and pitching "stuff". I ended up filling four of those large 30 gallon green trash bags with stuff I should have tossed a long time ago, but never did.

As a bonus, I "found" a few items that I have been looking for and had misplaced. For instance, last Winter, I had ordered a few kite winders that I wanted to use for storing the radiator wires for my EFHW antennas. As QRPTTF and FOBB approached, I knew I had them, but I couldn't locate them.  I had put them down in the shack, and just couldn't figure out where - exactly. I found them yesterday and they are now safely in my portable ops backpack. Of course, it's as we approach the end of the outdoor QRP contest season - but I have them. Yay!

I actually have room to move around and breath in there now!  Don't get me wrong .... it's by no means an immaculate shack. I still need to dust and I want to re-hang my DXCC, WPX and QRP-ARCI awards on the main shack wall before I will consider the job done. However, I can now bring a visitor into the shack without fear that they'll be swallowed up like one of those hoarders you see on TV.

I finished up the evening, by returning to the shack after dinner to see how 80 Meters was behaving itself. It sounded relatively quiet, so I guess that's another depressing sign that Autumn is on the way. (My regular readers know that I'm a Spring/Summer kind of guy and that Autumn bums me out because I know that Winter is not far behind.) I plunked down around 3.561 MHz and tried calling CQ for a bit. For my efforts (no real big effort!) I was rewarded with a QSO from Lee K4ISW in Chartlottesville, VA.  Lee just recently acquired a K3S and I was one of his first week's worth of QSOs on the new rig. Lee's K3S sounded great and Lee sounded happy - so I'm thinking a win/win situation is occurring at the K4ISW shack.

80 Meters sounded great after a Spring and Summer filled with static crashes and loud background QRN.  The return of 80 and 160 Meters into useful Amateur Radio bands is the ONLY good thing about Fall and Winter, in yours truly's humble opinion.

Author: Larry W2LJ
I did go out to the Jeep during lunch today, and no, the bands were NOT dead. But before I go there, I must digress.

I was involved in a 2X QRP QSO on 14.060 MHz with Tom, KC9RXI in WI. He was about a 449 to me; and I'm sure I was no better to him, but we were having a QSO.  I'm sure at times, that to people who may have been listening to the frequency, that it sounded like it was dead.

All of a sudden, out of the blue, another QRPer started calling CQ/QRP on frequency!  The call will be omitted to prevent embarrassment (but it is forever burned into my brain).  Not so much as a single, solitary "QRL?"

Yes, I am sure that both Tom and I were weak, but we WERE in the middle of a QSO.  Coming on to a frequency, plopping yourself down and commencing to call CQ without asking is just - arrgh! And to top it off, the CQer was calling CQ DE WXXXX/QRP !!!!  I'm sorry, but QRPers, above all Amateur Radio ops, should know better. No excuse - period. If he had sent "QRL?" waited for a bit AND THEN had started calling CQ on top of us, I may still have been annoyed, but I would have thought to myself, "Well, he just didn't hear us."

Unfortunately, while Tom was trying to talk to me, I had to transmit "QRL. PSE QSY". He immediately QSYed (so he was able to hear me!), but at that point I had lost what Tom was trying to say. Shortly after that the QSB went off the Richter scale and the QSO came to a premature end. The "meat" that I could have copied was drowned out forever by needless QRM.

A bit after that debacle, I went to 12 Meters and tuned around for a bit. I heard 7QAA in Malawi quite loudly.  He was loud enough to work - even QRP. I don't think I broke the pile up, as again there was a lot of QSB. If I had more time (lunch hour was running out) I'm pretty darn certain I would have worked him. This time I had the patience - I ran out of minutes.

So , even with the G4 geomagnetic disturbance, Malawi was coming in the best I've heard them so far. Go figure.  Luckily, the station will be on the air until early April and I'm taking a vacation day on Friday. I just may make it into their logbook yet! 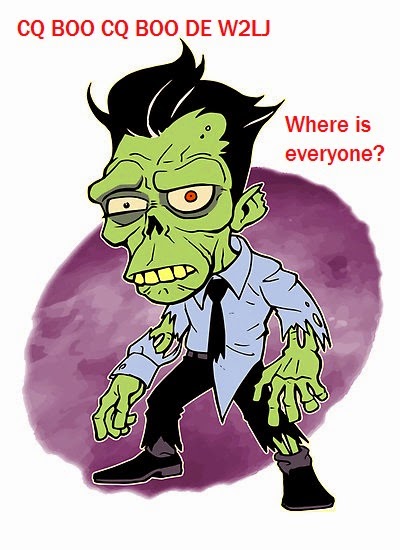 I joined the Zombie Shuffle, already in progress at about 0020 UTC (7:20 PM Local Time). I got on 20 Meters and worked four fellow Zombie Hunters in pretty rapid succession. I thought it was going to be a great night.
I was a tad mistaken.
From there, it got slow - real slow - shuffle slow - slower than shuffle slow.  This Zombie ended up doing a moon dance - looking like he was walking backwards. The perceived lack of participation or lack of good band conditions was a bit of a disappointment.
I stayed on for two hours and worked 13 stations - which somehow seemed appropriate. At that point, while the KX3 was merrily calling "CQ BOO" for me, I actually started to nod off for a few seconds. Being the conscientious, law abiding Amateur Radio operator that I am, I decided it was not a good thing for the Control Operator to fall asleep behind the key. So I accessed the local control point, pulled the big switch and made my way upstairs to get some much needed ZZZZZZZs.
Thanks to fellow Zombies WA5TCZ, KG9DW, KA5T, N5GW, N8RVE, W3KC, W1PID, W3ATB, AB9CA, N1ABS, VE3CBK, WA8REI and WB8WTU for the contacts - lotta good friends there, It was a pleasure to work you all! Five on 20 Meters, six on 40 Meters and two on 80 Meters (which was beautifully quiet without hardly any background QRN - oh if there had only been more Zombies there!).
By the way, I was one of the Elvis stations again this year - so if you worked me, I was worth extra pointage. And as always - special thanks to Paul NA5N and Jan N0QT for running another spectacularly fun event, my own tiredness notwithstanding!

What a difference a day makes!

Yesterday, at this time, the bands were humming (relatively) with Skeeters, WES’ers, and WAE’ers, just to name a few. 24 hours later, during a later lunch break ……. not much of anything.  This is where I was picked up by RBN: 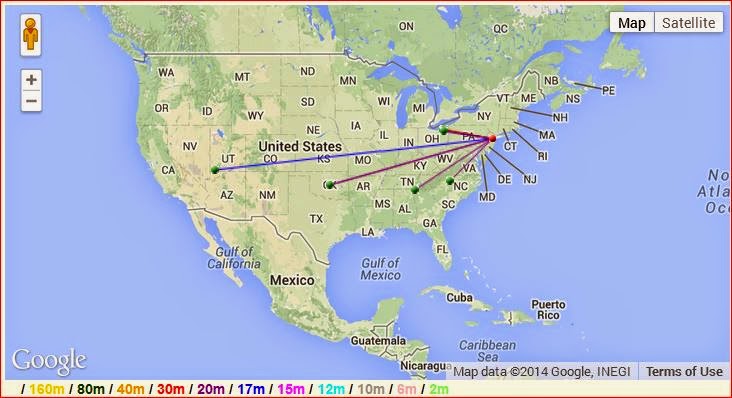 The one QSO that I did have was with HA3NU on 15 Meters. Other than that single contact, I spent most of my time calling CQ on 20, 17 and 15 Meters, interested to see where my signal would be picked up. Not as productive a lunch time QRP break as I would have hoped for.
72 de Larry W2LJ
QRP – When you care to send the very least!
Please support our generous sponsors who make AmateurRadio.com possible:
Search AmateurRadio.com
Do you like to write?
Interesting project to share?
Helpful tips and ideas for other hams?