For those of you out there

Author: Larry W2LJ
who have a real yen for Amateur Radio contesting and Radiosport competition in general ........... I ran across this announcement on the ARRL Webpage the other day.

The State QSO Party Challenge is a competition comprised of other contests, namely state and provincial QSO parties. As explained on the website, the annual cumulative score program is open to any radio amateur who participates in any approved state QSO parties (SQPs).

Participants just need to submit their QSO party scores to 3830scores.com to enter the challenge. Participants’ cumulative scores will be calculated by totaling up the number of reported contacts and multiplying by the number of SQPs entered in the year to date. Periodic standings will be posted to 3830scores.com, the QSOParty Groups.io forum, and the StateQSOParty.com website.

“Using the number of QSO parties entered as a multiplier is expected to encourage radio amateurs to enter more state/province QSO parties,” the program’s organizers said. “The first SQPs in 2020 are the Vermont, Minnesota, and British Columbia QSO Parties in the first weekend of February.”

Entrants must make at least two contacts in a QSO party for it to count as a multiplier. Full details are available on the State QSO Party Challenge website. Challenge sponsors expressed appreciation to Bruce Horn, WA7BNM, for developing the SQP Activity Tracker on 3830scores.com.

This is interesting in a few ways.  Even if you decide to not formally participate in this, it can be taken on as a real personal challenge. "How many State QSO Parties can I participate in?". For me, it would be a big deal to participate in all fifty, plus Canada  This kind of reminds me of the QRP-ARCI Golden Jubilee event a few years back, where the goal was to work K6JSS stations in all 50 states.

Secondly, would I be able to make "at least two contacts" in all of these? With band conditions the way they are - the state QSO parties in Alaska and Hawaii and some of the Canadian Provinces might prove to be a real challenge. But then, going back to the QRP-ARCI Golden Jubilee event, Alaska and Hawaii were NOT the two states I missed!

Thirdly, this would be a great way for those who are on their way to earning Worked All Sates to actually accomplish that.

Fourthly, for those of you out there who complain about the bands being "flooded with contests" every weekend (you know who you are), this would actually make that a good thing. Instead of disdaining these QSO Parties, it would be an incentive to jump in and make them into an enjoyable and an interesting experience for you. After all, you don't have to stay in them for the entire event if you don't want to - but can you make just two QSOs in each?

I just might be tempted to take on the personal challenge myself!

I've been keeping an eye on the long range weather forecast via WeatherUnderground for this coming Saturday - FYBO day.

NOW it's supposed to be "just" a cloudy day with just a chance of showers. Meanwhile, last night on the news, the local weather prognosticator was calling for a possible Nor'Easter this weekend. It's enough to make your head spin!

I was hoping to go up to Washington Rock State Park for a couple of hours. That's my favorite place to operate portable from - plenty pf picnic benches and a plethora of tall trees. But with this ambiguous and ever changing forecast, I got the bright idea to go to Putnam Park in town, instead. That's where SPARC has done JOTA the past few years, and there's a covered pavilion there. Should it begin to precipitate, at least I'll be dry. The trees are not as tall; but they're tall enough for me to launch the PAR ENDFEDZ into.
At 62, I'm no young buck and no spring chicken. I don't need a case of pneumonia or bronchitis. No QRP contest is worth that! But I can dress for the cold, as long as I can stay dry.
Stay tuned!
72 de Larry W2LJ
QRP - When you care to send the very least!

Author: Larry W2LJ
This weekend is Museum Ships Weekend!  This is always a lot of fun to see how many you can work. And the event is sponsored by none other than the Battleship New Jersey Amateur Radio Station.

As per the ARRL Announcement

Museum Ships Weekend will take place over the June 1 – 2 weekend, sponsored by the Battleship New Jersey Amateur Radio Station NJ2BB. Radio operation will be from a variety of vintage and noteworthy vessels. This is not a competition.

So far 75 ships are on the roster to take part. All stations working at least 15 different participating ships will receive a certificate, if they send a copy of their log showing these contacts.

This is what I love about Summer - there's always something going on, just about every weekend. If you follow the link above, you'll get a list of who will be on the air. Log 15 ships and $4 will get you a piece of wallpaper for your shack.

This one is being carried out by the Torbay Amateur Radio Society in England.  Here's the info that the ARRL is disseminating:
June 6 will mark the 75th anniversary of Operation Overlord during World War II and the D-Day landings in Normandy. To commemorate those who took part, a small team from the Torbay Amateur Radio Society (TARS) in England is organizing a chain of five special event stations along the UK’s southern coastline. Each will be based in the geographical area of a beach-landing force point of departure and will use a relevant call sign.
TARS will activate a site above Brixham Harbour in Devon — a departure point for many US soldiers who later landed on Utah Beach and will use the call sign GB75UF.
Other clubs activating similar relevant locations will use these call signs: GB75OF — Omaha Beach, South Dorset Radio Society; GB75GF — Gold Beach, Southampton ARC and Soton University Wireless Society; GB75JF — Juno Beach, Itchen Valley ARC and Waterside New Forest ARC, and GB75SF — Sword Beach, Fort Purbrook ARC.
In addition, TARS hopes to have two club stations from the Normandy area of France activating sites on the beaches. Logging is being coordinated centrally, and stations who contact two or more of the stations within the chain will be able to download a suitable certificate to commemorate their achievement. Details on logging, certificates, and operating frequencies will be available on the TARS website. Contact the organizing team via email.
SSB frequencies will include 3.644, 7.144, 14.144, 18.144, 21.244, 24.944, and 28.244 MHz (data only on 10.144 MHz). Stations operating on CW or data will attempt to use similar frequencies ending in 44.
And now for something completely different.
I saw some Hams talking about this on one of the e-mail reflectors I subscribe to. It's the Acu-Rite Lightning Detector. 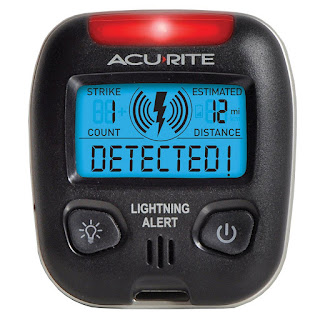 With the plethora of bad weather we've been getting here, I went onto eBay and picked one up for $20. It arrived yesterday and I put the batteries in, turned it on and it started detecting local lightning strikes immediately - at about 17 miles out. At that point, I wasn't even hearing thunder rumbles. Within a few minutes I WAS indeed able to see flashes and hear thunder, so it seems to work.
A few hours later, it started chirping again and sure enough - about ten minutes or so after chirpage, another thunderstorm was upon us. I will keep this little guy going so that when I'm home and the antennas are connected, I'll get ample warning that it's time to go disconnect. Better safe than sorry!
72 de Larry W2LJ
QRP - When you care to send the very least!

Author: Larry W2LJ
That's how I think of it, anyway ..... right up there with BBQs, lemonade, ice cold beer, pretzels, watermelon, ice cream and swimming pools ..... The 2018 Flight of the Bumblebees has been announced!  Thanks to Rich Fisher for putting this on from year to year, this event, along with QRP To The Field has gotten me "into" portable QRP operations more than anything else. 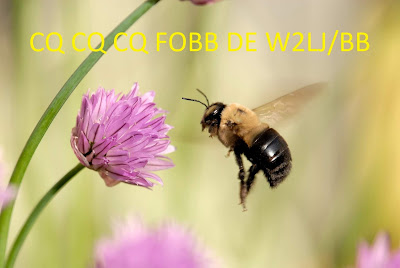 OK, so maybe I'm an Amateur Radio and QRP nerd, but what is more sublime than sitting somewhere in a nice shady spot on a hot summer day, making contact after contact with QRP friends around the USA and the rest of the world? The breeze in your face, the Bumblebees buzzing, the bands hooping with CW?

This year, the last Sunday in July falls on July 29th and the contest runs from 1700 to 2100 UTC. So grab your radio, a hunka wire and make like a bee and get out to the field and pollinate those frequency bands! Get out of that musty ol' shack and enjoy the beautiful weather and sunshine. These are the things I dream about while I'm shoveling the pile of frozen over, rock hard slush that the snow plow leaves at the end of my driveway after every big snowfall.

For the rules, please go to http://arsqrp.blogspot.com/

For the roster, please go to https://docs.google.com/spreadsheets/d/1OzR8FvgVX9J2U0BsjPPg7uzqbuv4C93IAmf7hr8_5GY/edit#gid=0

Author: Larry W2LJ
So I'm driving to work this morning; and when you commute to work every day, you get a real good chance to look at the behinds of cars that are in front of you.  As I come to a red light and come to a stop, I notice the car in front of me has one of those vinyl decals on his rear window.  It looked like this - but you have to picture in your mind's eye that this was all surrounded by the entire darkness (blackness) of his tinted rear window. 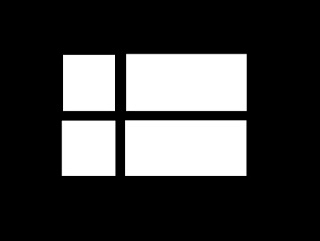 So I immediately start thinking ....... "A A"
What the heck does "A A" stand for?  "Alcoholics Anonymous"?  "American Airlines? "Associate in Arts"? "Alcoa Aluminum"?
Then it struck me - the owner of the car was of Norwegian descent !  That's the flag of Norway in reverse and not "A A".
I guess that's when you realize you've either been at this Morse Code thing too long; or maybe you just need that first cup of coffee of the day.
72 de Larry W2LJ
QRP - When you care to send the very least!

Author: Larry W2LJ
Thanks again to Mike KD5KC for posting these on QRP-L.

You may remember a few years ago (I think it was just a few years ago - maybe 10 years?, or maybe I'm having a "senior moment"?) Icom released a series of comics entitled "The Adventures of Zack and Max".  These were anime style comic books intended (I guess) to get the youngsters curious about Amateur Radio.

Max was a strange little pig companion to Zack - a boy and his pig - go figure. 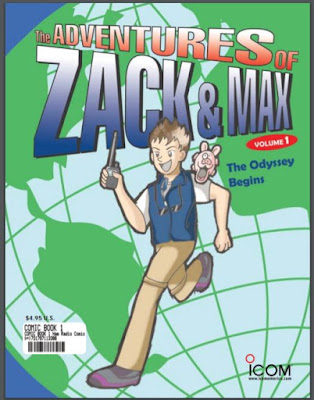 Anyway, here are their links - both as comic books or as coloring books. If you have any kids or grandkids who are curious about what it is that you do - these may be helpful to explain it to them in a more contemporary fashion.