Zeroed in on another DXpedition…….. 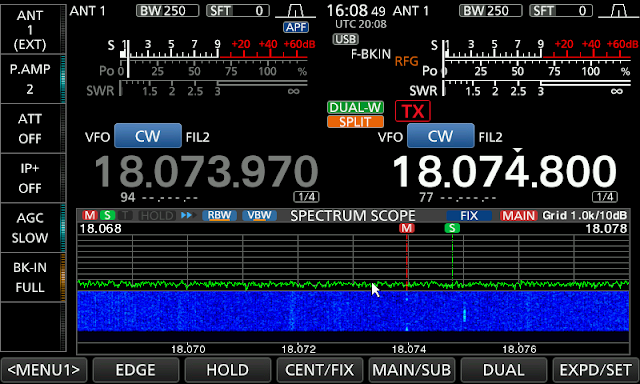 Yesterday I had a nice relaxing afternoon sitting at the 7610 checking out the bands. Solar conditions have been great the past while and that is a nice change to see.  I was able to work 7P8RU again, and I did see the DXpedition HD8R from Galápagos spotted on DX summit . I was not able to hear them on 20m and barely on 40m, but then I saw them spotted on 17m. I found 17m to be very quiet, and I definitely saw HD8R on the waterfall but no pile up was being shown.  I placed the Icom 7610 in Dual watch and split mode and found HD8R was working many stations, but most if not all I could not hear. The DX stations they were answering were mainly U.S. stations, so I realized the band was open in my direction.  As I listened and I emphasize "listening".  Now and then some U.S. stations were heard at my end working HD8R and this allowed me to get the team's strategy for working DX.

I blindly threw my call-out a few times, and very soon after I heard VE9KE 599....I came back with VE9KK KK KK and low and behold the call was corrected, and I was in their log. Once again 100 watts and my Endfed antenna came through for me.

This weekend is the CQWW SSB contest and for the SSB folks this is a big one. There is going to be lots of rare DX to be had for sure. For me I am a CW guy and not because I snub SSB but because in the past when operating SSB I have caused issues with neighbours. I am going to see if the rare CW stations have less of a pileup this weekend because of the SSB contest and many will be operating in that.