My QRP crystals finally arrived. Murphy worked overtime on this eBay purchase: the first batch apparently got lost in the post and the replacements were sent by mistake to another customer with the same surname. But I have at last been able to try out the little QRP CW transceiver built to G3XBM’s design on the QRP working frequency. 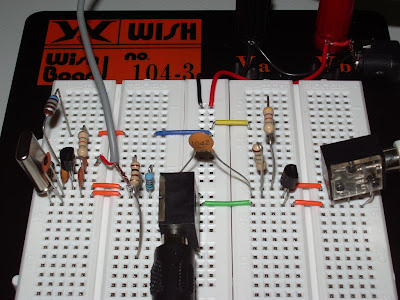 The transceiver is still on the breadboard as I was waiting to try it on both 40m and 80m before deciding which band to make it up for. Certain components need to be optimized for the band in use, and even the crystal in use, since to save space I’ve hand picked a fixed capacitor to set the transmit frequency instead of using a trimmer. I need also to decide how much power output I want because that is governed by other components. I have had over 200mW out of it but I’m not sure if a 2N3904 without a heat sink could really handle that, so at the moment it is set up to give 100mW output when powered by a 9V rechargeable PP3 battery.

I’m leaning towards 40m as this would make a nice little fun portable rig and the antenna being half the size of 80m would make things much easier. 40m generally has more activity during the daytime, too. I have never found 80m an easy band to work with limited antennas and low power, so it has always surprised me that the lower band is so popular with QRPers.

Of course, it being the weekend there is a contest on today, so not much chance of being heard with 100mW. Even if someone did hear me and reply, it’s doubtful if I could pick them out using a receiver with no selectivity whatever! This tiny, simple transceiver is amazingly sensitive, as you can hear in this 1 minute audio clip recorded on 40m this afternoon using my MFJ magnetic loop for an antenna. How many different stations can you copy?

This evening I may put the 80m crystal in and see what it sounds like on that band. Unfortunately the little receiver has no tools for fighting the terrible QRN that comes on during the evening when all the neighbourhood plasma TVs are switched on, and sometimes 80m is all but unusable.