A blog post by Roger, G3XBM, about how far he was able to be received running 5mW of WSPR on 80m using a lash-up antenna prompted me to give QRPP WSPR a try. But before I could start, I needed to make an attenuator. The lowest power my K3 or K2 will go down to is 100mW, but not with very much accuracy. I decided to make a 20dB attenuator which would divide my power by 100, so I could run 1W and get 10mW output. 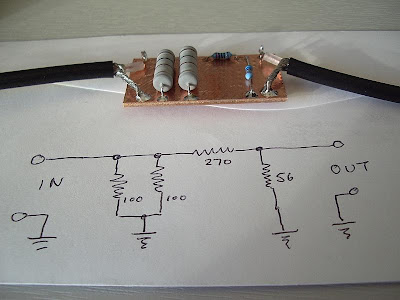 There are numerous websites that will design an attenuator for you given the working impedance and amount of attenuation required. I was not looking for precision – I would be surprised if the output of either of my radios was within 10% of the selected power anyway – and moreover I wanted to build it now using parts from my junk box not have to send off for some exact values and wait for several days for them to arrive.  My attenuator was built as shown above and gave a 1.2:1 SWR over the HF range which was good enough for my purposes.

I started yesterday evening running 10mW on 80m into my end loaded attic dipole. I received no spots at all initially. I was puzzled as to why I could hear the WSPR audio using the K3 monitor even though the extension speakers I use with the K3 were switched off. I was about to compose an email to Elecraft enquiring whether the last firmware update had the effect of routing the monitor audio to the internal speaker even when an external speaker is connected when I realized the sound was coming from the computer speakers! Windows had decided to renumber the sound cards since I last used WSPR and although the receive channel was still the same and spots were being decoded the transmit audio wasn’t going to the radio. Doh!

Some time after I began transmitting I received a couple of spots from G3XLW 478km away in the south of the country. But that was all. I decided to leave it running overnight and received spots from David off and on throughout the night. These were augmented in the morning after 0800z by three spots from M0DDT at a distance of 355km to the south east. Not as impressive as Roger’s results. I guess my attic dipole, being very low for an 80m antenna, is a cloud-warmer and sends most of the RF straight up. Roger was loading the feeder of his 10m halo which doesn’t sound like much of an 80m antenna but in effect he had a top loaded vertical which probably has more lower angle radiation. That’s my theory, anyway.

It was an interesting test and I shall try very low power WSPR again on other bands. However I don’t agree with the extremist view held in some circles that people should only use WSPR with such low powers. It’s certainly interesting to discover if you can get to the end of the street on 10uW but higher powers of a few watts will reveal propagation to places lower powers won’t, information that is likely to be more useful when applied to making contacts using other modes.