As stated in my earlier post this week, my intention was to come full circle and to end NPOTA as it began, with activations of both the Washington-Rochambeau Trail (TR23) and Morristown National Historical Park (HP28). The day started sunny and a bit cold as I made my way up to Morristown.  I haven't been up there since last May, and since I take all back roads to get there, I was using my TomTom GPS unit to guide me there. About 1/3 of the way there, the TomTom gave up the ghost.  Rebooting and resetting did no good.  The map screen was nothing but a blank, white screen.  Fortunately, I was able to retrace my steps without getting lost. 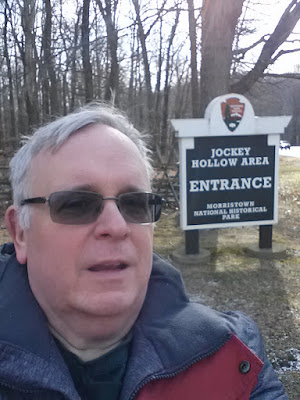 I set up in the parking lot and set up my 40 Meter Hamstick on the Jeep roof and the magloop right next to the Jeep. I was intending to start out on 40 Meter CW with the tried and proven Hamstick in order to get the 10 minimum QSOs that are needed for a valid activation; and only then switch over to the magloop for 20 Meters, as I really haven't used it enough to be confident in it as a proven performer. 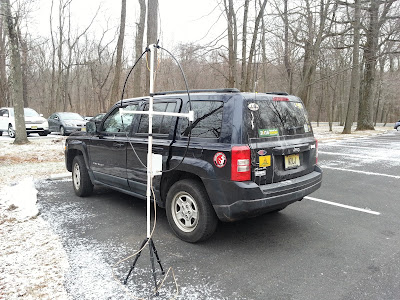 After getting everything set up, I made myself comfortable and self spotted my activity on both DX Summit as well as the NPOTA page on Facebook.  I was rewarded with 38 QSOs on 7.038 MHz and then called CQ for a bit until the activity died out.  Then I switched over to the SSB portion of the band in order to find an empty frequency.  My goal was to work Dave KD2FSI who was staying in nearby Morris Plains. Dave and I have a history as far as NPOTA goes.  When he activated HP28 last January, I drove up to lend him some assistance.  Together, we both coached several fledgling members of the South Plainfield Amateur Radio Club during an activation of TR23. And when Dave would activate an NPOTA entity during his travels throughout the year, he kept me abreast of his agenda and gave me several ATNOs.
To work Dave on the last day of NPOTA would have been a privilege and an honor.  Gladly, it came to fruition; and I was able to have a brief sideband contact with him on 7.220 MHz (gladly, I thought enough to bring the microphone along, which turned out to be very important). After working Dave, I turned my attention to 14.061 MHz and the magloop.  With the 6:1 reduction drive, it seemed to take forever to find a noise peak, but eventually I did.  After carefully turning for peak noise, I hit the auto tune button on the KX3, thinking that I would "clean up" and lingering SWR. The auto tuner clicked and clacked for about a millisecond as I was already there - the KX3 showing me that I had a 1:1 match.  Now the proof would be in the pudding, Was my home brew magloop as good as advertised; or would be just a waste of my time and money?
The magloop turned out to be a great performer, way beyond what I thought was possible. With only 5 Watts, I was getting great signal reports from California, Idaho, Montana, Colorado, the Azores and Italy! Wow! Something that I built from scratch actually worked and it ended up costing me substantially less than a commercial unit. To say that I was pleased would be an understatement. I was more akin to walking on air.
Then then next hour even topped that!  Much to my surprise, Dave KD2FSI drove up next to me and parked in the space next to mine.  I got out of the Jeep and greeted him and we had ourselves a very nice time talking and discussing NPOTA and the day's events. 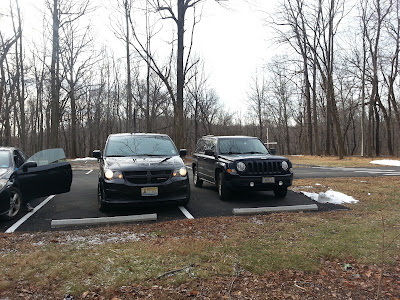 While we were shooting the breeze, we both noticed a group pf people a little bit over in the same parking lot.  They had set up tables and had some drinks and some food that they were enjoying.  One of the women from the group came up to us and asked what we were doing and was my magloop "Some kind of antenna?"  We explained NPOTA and Amateur Radio and that's when she invited us over to join her friends for a warm drink and to explain to all of them what we were doing. It seems they were a group of Norwegian descendants who usually get together, either on Christmas Eve or New Year's Eve to enjoy some food, drink and fellowship outdoors.  They gave Dave and me a hot cup of Glug, which was a mixture of red wine, almonds and raisins.  While we sipped we gave a good talk about Amateur Radio, NPOTA, the ARRL and the National Parks System as well as a few points about Emergency Communications.  They thanked us and we thanked them and then Dave and I headed back to our cars. He left to get back to Morris Plains, and I packed up to head back home to TR23.

About a 1/2 hour later, I arrived at the Frazee House in Scotch Plains, which is right on the Washington - Roachambeau Trail; and it was the same place I activated the Trail from during the NJQRP Skeeter Hunt.  When I activated TR23 last January, I did it from the entrance to the Ashbrook Golf Course.  It was open yesterday and I didn't want to cause any commotion, so I came back to the Frazee House which is only a couple of minutes farther down the road. 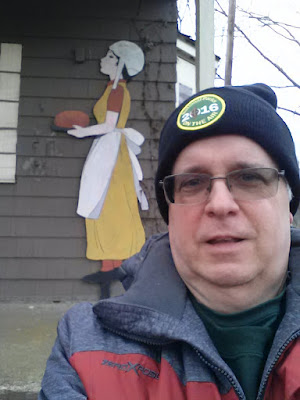 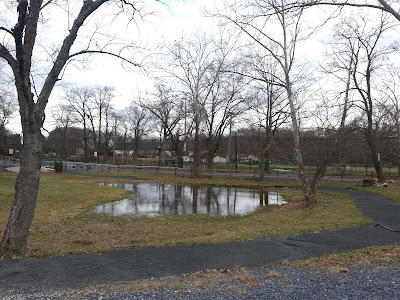 This time I decided to use another arrow from my antenna quiver,  I also brought along my Joplin ARC antenna launcher and I got a line over a tree and made use of the PAR ENDFEDZ 40/20/10. 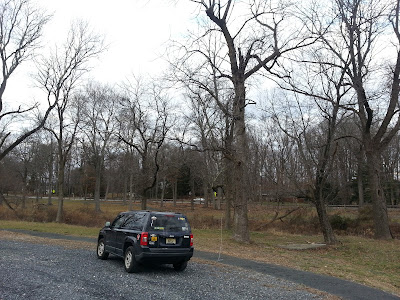 I ran the coax into the Jeep through a crack in the window and got down to business.  I ran off a bunch of QSOs on 40 Meters and was about to switch over to 20 Meters when I noticed out of the corner of my eye that a vehicle had pulled up next to me.  This time, it wasn't another Radio Amateur. This time, it was a member of the Scotch Plains Police Department.  I guess I called some attention to myself, being the only car there, in an otherwise empty place.   I got out of the car and walked a step or two to his rolled down window. I introduced myself and gave the spiel about NPOTA and how Raritan Road is part of the Washington - Rochambeau Trail, which he knew.  What the Officer didn't know was that the trail is part of the National Parks System and he was very surprised by that. Then he told me about how his grandfather was a Ham, that in fact W2KKG was his call sign.  We talked a bit, shook hands and he went on his way; and I returned to the Jeep for 20 Meters.

20 Meter CW proved to be a disappointment. Even with self spotting, I garnered only about 15 QSOs before the activity petered out, way too soon in my opinion.  I sat there, with KX3 calling CQ, debating whether I should pack it in and go home.  It was getting to be around 2:30 PM EST, and I only wanted to be out until around 3:00 PM as I had a previous commitment at 5:00 PM and I had to get ready for that. Wanting to get a least a few more Qs in the log; so I decided that I would give 20 Meter SSB a shot.  With the deep cycle battery, I could boost the KX3's output to 10 Watts. The PAR was up in a tree about 50 feet up or so, so I figured, "What the heck!".  I didn't even bother to spot myself, I just hooked up the microphone and started calling CQ on 14.340 MHz, figuring that what would be, would be.

Much to my surprise, about 60 QSOs later, the pileup ceased.  With 10 Watts, I had worked all up and down the East Coast, across to California and Washington State and even up into Alberta, Canada. In all, there were only 1 or 2 instances where I had to repeat anything. It was pure bliss!

As it started becoming overcast and dusk started settling in, I packed everything up and headed home. I was in another world, walking in rarefied air. NPOTA turned out to be everything it was chalked up to be; and more.  Thanks to Sean, Norm and all the ARRL staff who worked tirelessly behind the scenes to make NPOTA the success that it was. I have never been more proud to be a Life Member of the ARRL.  Friendships that will last a lifetime; and new memories that will last a lifetime are the direct results of NPOTA. It just doesn't get any better than this.

Later, I was talking with my good friend Bob W3BBO on Skype, as we do just about every Saturday evenming,  I had worked him earlier from HP28 and we talked about our QSO a bit more in depth and about the day in general. Bob stated that, in a way, he felt bad for me.  As he tuned around 20 and 40 Meters, it seemed like it was just wall-to-wall NPOTA. He told me that he was sure I should have been at home boosting up my entities worked total. I told him not to feel bad, as not only had I worked a couple new ones via Park to Park QSOs; but there was nowhere in the world that I would have rather been - handing out QSOs as an Activator on the last and best day of NPOTA.