It was a fine day, too fine to stay indoors, so I decided to go out for a couple of hours and do some more mobile operating with the K2 and MP-1 antenna. I didn’t want to drive all the way to the coast as it takes a bit too long so I wanted to find a good site nearer home. I studied the map and found a likely spot not much more than three miles away near Tallentire Hill. There is a narrow lane that runs high up along the side of the hill with a good takeoff from north through west to south. At the high point there is a wide verge where you can park clear of the road. The only people who disturb you up there are a few dog walkers from Tallentire village, so it is ideal. 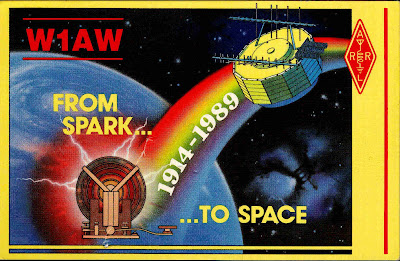 Today 15m didn’t seem quite as good as on Tuesday – or perhaps being beside the sea made a difference? Anyway after a while of tuning around on 15 I moved down to 17m and had a 5 minute chat with Sonny W8FHF in Ohio. Shortly after that I heard W1AW the ARRL headquarters station in Newington, Connecticut calling. It was being operated by Ron, K1RKD from nearby West Hartford. As an ARRL member I was particularly pleased to work HQ and Ron promised to log me on the computer so I would receive a QSL card via the bureau.

I heard several other US stations and also Javier, XE2CQ very loud. I was sure he would hear me given the chance but he was having a long chat with someone and I didn’t get an opportunity to call him. I made one more Stateside contact, with Roger N4ZC near Charlotte, North Carolina, though he struggled a bit to hear my 12W signal so it wasn’t a long one.

I went back to 15m after that, but the only other station I worked was Yussuf, CN8YZ, 59 both ways (he was running 25W.) Not great DX but still a nice contact.

I am getting a bit hooked on this mobile lark as I seem to be hearing much better DX than I do from home and it is just so pleasant to hear atmospheric band noise and copy weak signals instead of the awful racket demonstrated on my recent video. In fact I must find out where I can obtain another power cable for my K3 as I would like to try my best radio in the car. It would be nice to have a bit more power, although I’m getting a real kick out of making SSB contacts with 12W to a mobile whip, but the main thing is the K3 receiver is much better.