Where can I get APF and DIV stickers for my K3? 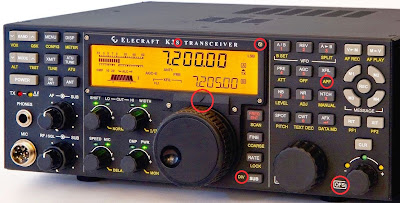 The updated Elecraft K3, the K3S, has some nice improvements that would be nice to have, but which I also can live fine without. But even an old K3 can be updated to some of these improvements. They are detailed on the Elecraft K3S FAQ.

I studied the front panel for differences and put red rings around them. The three to the upper left have to do with the new display bezel with silver instead of black screws, the S in K3S, a built-in marker for the VFO A knob, and a soft-touch VFO A knob.

In addition to the marking with OFS (offset) to the left of the RIT/XIT control, there are two markings that also reflect what my present K3 with the latest firmware does:

It sure would be nice to get stickers with APF and DIV to put on mine!
Sverre Holm, LA3ZA, is a regular contributor to AmateurRadio.com and writes from Norway. Contact him at [email protected].