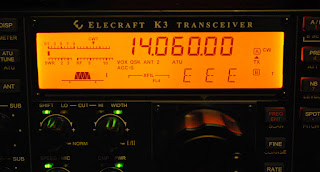 The bands were very dead for DXCC's so I turned the radio off and decided to just do some web surfing and that soon became same old same old. I then had a brain storm that it has been just way to long since I had a good old fashioned QSO. Most of my time has been hunting for counties that I need for my ARRL Jubilee award. This meant for the past few weeks and maybe a month or so I have been just working the CW key with "599 73 TU" and that's it. I turned the K3 on and it just happen to be on 14.060 and KM4CU was calling CQ. I came back to him and the QRP to QRP conversation began..........so I thought!! Tom's code was great from Florida........my code..... not so much. I was absolutely embarrassed. I kept messing up his call, I could not even get passed "nice to meet you" it was like my mind went BLANK I was not able to figure out what to say and how to translate it to code!!!  Tom was very fast to send his 73's to me (it was like I was an ugly date). Once again I just struggled with the ending and once done ( which seemed like for ever) Tom was just gone........it was like a Morse code blind date that just went south very fast.......very embarrassing!!!! Tom if you read this blog I am very sorry for the code train wreak. LESSON LEARNED
Mike Weir, VE9KK, is a regular contributor to AmateurRadio.com and writes from New Brunswick, Canada. Contact him at [email protected].