One of the cool things about the Summits On The Air program is that it has many different awards available. The SOTA database records the QSOs of everyone involved in the program and is used to qualify for the awards. QSL cards are not required. The most coveted awards are Shack Sloth (reaching 1000 points as a “chaser”) and Mountain Goat (reaching 1000 points as an “activator”). There are so many SOTA activators on the air these days, reaching Shack Sloth is not too difficult. Just get on the air and make the contacts. (Last year, I completed Shack Sloth using VHF and higher frequencies only.) Mountain Goat is much more of a challenge because you have to physically go out and activate each summit, one at a time. Currently, there are 9 radio hams that achieved Mountain Goat status in Colorado. I have a long way to go for Mountain Goat. 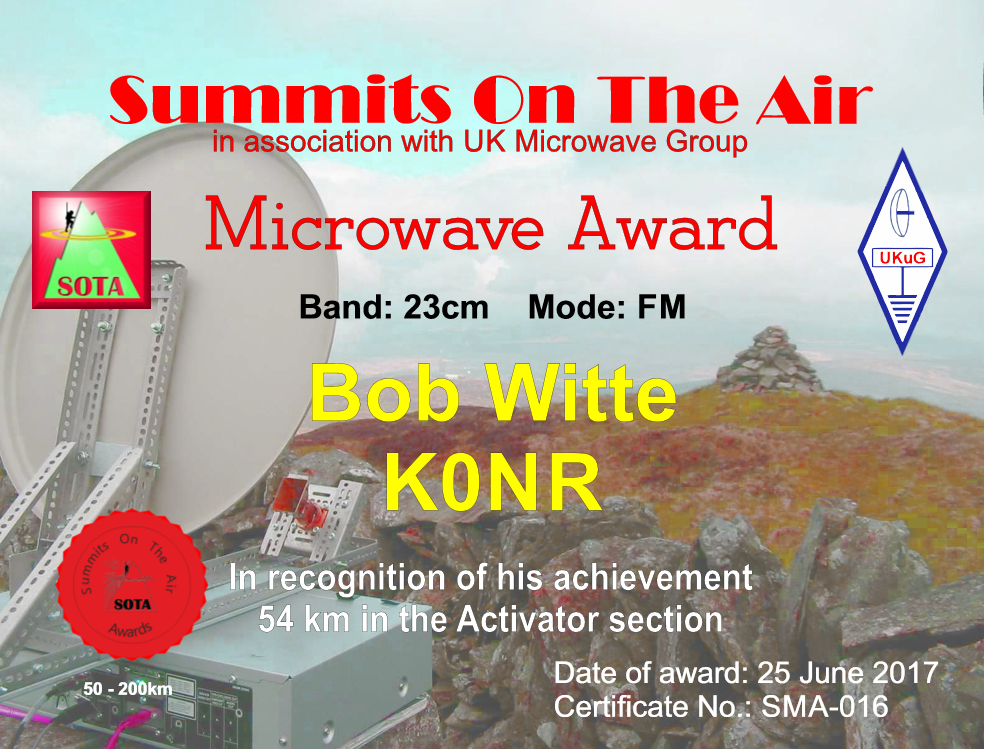 Most of my SOTA contacts have been on the 2 meter band (144 MHz) using FM, SSB and CW. Recently, I put additional emphasis on making QSOs on two of the UHF bands: 70 cm (433 MHz) and 23 cm (1.2 GHz). With the SOTA scoring system, there are no extra points or credit for working the same station on additional bands. Still, I’ll often check with the other station on 2m to see if they want to make a QSO on one of the other bands…just because. The SOTA database does keep track of these QSOs separately so you can go in and look at your results on, say, just the 70 cm band.

For some unexplained reason, 1.2 GHz has my interest right now and I’ve been trying out my capabilities on that band. The 23 cm amateur band is one huge hunk of spectrum: 1240 to 1300 MHz (US allocation). To put this in perspective, this 60 MHz swath of spectrum is 171 times the size of the 20m amateur band. (Yeah, I grant you, the propagation on 20m is usually a lot more interesting.)  So the first thing I ran into on this band is the lack of commercially available equipment. I think the number of radios that will do 1.2 GHz has actually declined in the last decade. I ended up buying a pair of Alinco DJ-G7T handheld tranceivers that put out 1W of RF power on 1.2 GHz.The second thing I ran into is the lack of other hams that have 1.2 GHz gear. But when you do find them, they usually are interested in making a contact! (I suppose it gets lonely on that band.)

Initially, Joyce K0JJW and I made some short-range SOTA contacts on 1.2 GHz using the two handheld radios, on the 1294.5 MHz FM calling frequency. Then I started looking for DX contacts from local stations that have 23 cm gear. To provide some additional antenna gain, I used a 4-foot yagi antenna (Comet CYA-1216E), specified as 16.6 dBi. One of the cool things about UHF and higher is that compact antennas can provide some serious gain. My best DX so far is 54 km (33.5 miles) but I expect to be able to do distances 3 to 4 times that. The SOTA awards system considers the 23 cm band to be “microwave” so my 54 km QSO just barely qualifies me for the 50 km award. (The microwave awards are based on distance worked, unlike the other SOTA awards.)

Just another fun thing to do on the ham bands, pursuing the Universal Purpose of Amateur Radio.

The post Using 1.2 GHz for SOTA appeared first on The KØNR Radio Site.