Use SSB on VHF For Better Range on SOTA Peaks

Previously, I had written about how the use of SSB made the difference while activating Prospect Mountain (W0C/FR-069) for Summits On The Air (SOTA). This time I was the SOTA chaser, trying to work Brad WA6MM as he activated two peaks near Breckenridge, Colorado. 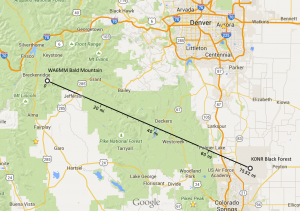 It was the Saturday of ARRL Field Day, so I planned to be out at our FD site in Black Forest. Brad and I had coordinated in advance and pretty much concluded that it would be difficult or impossible to make the contact on FM. Brad decided to take his FT-817 along with a homebrew 4-element yagi to give him 2m SSB capability. Out at the FD site, I saw that Brad was spotted on Bald Mountain (W0C/PR-019) via SOTAwatch early in the morning, so I borrowed the FD VHF station to try to work him. It was an FT-897 pushing 50 watts to a 4-element yagi up about 30 feet. I heard Brad clearly on 144.200 MHz (SSB calling frequency) and we made the contact.

I estimate that the contact was about 75 miles. I did not do a careful analysis of the terrain but the the signal had to get over the Rampart Range and quite a few other mountains to get from Black Forest to Bald Mountain. The summit of Bald Mountain is at 13,684 feet, so that certainly helps.

A few hours later, Brad showed up on the summit of Boreas Mountain (W0C/SP-030), another 13er near Breckenridge. By now, the Field Day station was in use, so I pulled out my own FT-817 and a 3-element Arrow yagi. Holding it in my hand, I pointed it towards Boreas Mountain and tuned to 144.200 MHz USB. This time Brad was even weaker but still readable, so we completed the contact.

In both cases, Brad was fair to good copy but just above the noise, I am sure that using FM would not have gotten the job done. For serious VHF work, 75 miles is not that great of a distance but we were running QRP power levels with small yagi antennas.

Brad and I are both concluding we need to encourage the use of SSB for 2m SOTA here in Colorado. It is common to end up on a high peak in the Colorado backcountry and not have enough range to reach the larger population centers. Sure there are more people active on 2m FM, but if no one is within range, it does not matter.

Congratulations to WA6MM for first activations of two more challenging summits in Colorado and thanks for 18 chaser points!

The post Use SSB on VHF For Better Range on SOTA Peaks appeared first on The KØNR Radio Site.