Two Portable Ops, NPOTA, and the Shack – Oh My!

Finally getting a chance to get caught up since my last posting!  I have been having lots of fun with the radio lately so it’s time to check in.

Portable Op 1/45: On February 20 & 21 we visited my mother-in-law in the Kansas City area.  I knew the girls would be busy shopping and doing some sewing, so I brought the KX3 and antenna along.  I strapped the antenna to the deck railing and setup on the kitchen table.  I had lots of fun, there was some contest going on, but I have not looked up which one, but there was lots of DX.

I worked about 18 stations into South America and west to Hawaii.  Good times, but unfortunately none of them have confirmed via LOTW!

Portable Op 2/45: February 22nd I went to the local park over my lunch hour and had some radio fun.  I worked CO8LY in Cuba and two stations in NM – WS0TA (on a summit) and KE5AKL.

NPOTA Portable Op 3/45: On February 25th I had to be in the Kansas City are on business.  There are several of the parks in that area.  One spot was actually a three-fer since there were 3 trails that crossed at that location.  So I activated Lone Elm park which was a major camping location along the Oregon, Santa Fe and California Trails. 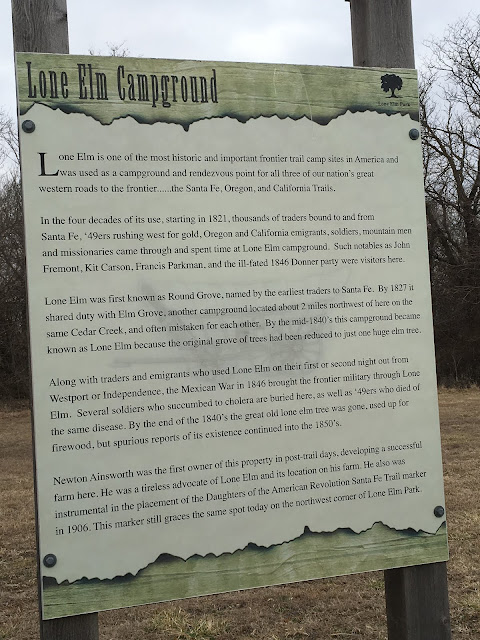 What a blast this was – in 2 hours I worked 55 stations all stateside except two DX from Canada and Belgium all on 20 meters.  I started out calling CQ about 14.059 and started getting some calls.  After about 20 minutes I spotted myself on DXSummit and it go crazy.  Having never been at the receiving end of a pileup on CW it sounded like one sound – I could not make out hardly anything except a fragment of a call.

What a blast!  If you have anyway to get out and activate one of the parks DO IT!.

Unfortunately on this outing right before I was ready to leave my Jakite pole collapsed into itself.  The top sections fell into the bigger sections with the wire antenna tied to the top.  I can’t seem to figure out how to get it back apart – it is stuck inside.  So I need to get that figured out before I can do much more portable operating.

In the Shack:  I have been having lots of fun running PSK31 from the shack.  In the last week or so I have worked over 30 stations.  This is a fun mode for quick contacts or a little rag chewing.  Most of the time I connect to the computer in my shack with Teamviewer on my iPad while sitting in my easy chair in the living room with the family.  This works really well and allows me to be around the family and still have some radio fun.

Burke Jones, NØHYD, is a regular contributor to AmateurRadio.com and writes from Kansas, USA. Contact him at [email protected].

3 Responses to “Two Portable Ops, NPOTA, and the Shack – Oh My!”