It’s been a very busy week for me both at work and at home following my vacation, so it’s taken me a while to find the time to start writing this. I’d hoped to provide a few more updates while I was in Costa Rica but I never found the time so I’ll do my best to try to remember what happened. I’m going to try write a number of shorter postings so hopefully I can get them all out over the next couple of days.

In my last posting, I’d talked about how it had been rainy all week. That weather continued, but I finally did figure out a way to get on the air for more than 10 minutes at a time. 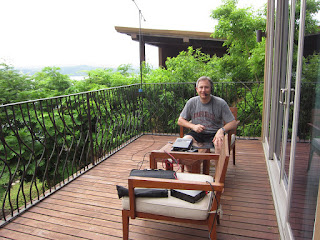 The problem was that my initial setup was on part of the outdoor deck with everything exposed to the elements. I would have been happy to bring the feedline inside, but the air conditioning system in the house we were staying at has sensors such that you can’t leave the sliding doors open even a little without the system shutting down. Considering the temperature and humidity, that wasn’t a realistic option, so I had to operate outside and hope for the best. In the picture, you can see the antenna in the background and I’ve got the power supply sitting on the chair with the radio on a little table. As long as it was dry, this worked out fine. Unfortunately, it didn’t stay dry long enough for me to spend any significant time on the air. 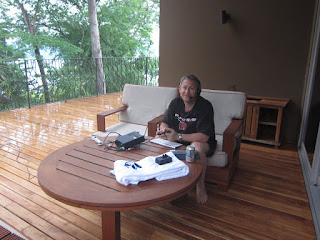 On Friday afternoon, the weather was once again uncooperative, and I was starting to think that I’d wind up leaving Costa Rica with only about 5 QSOs. However, Sharon pointed out that the deck next to the common area of the house had a pretty big overhang, and I realized that even with some of the really torrential downpours we’d had that area had stayed dry. I moved down to that location and set up the antenna there, configured for 15m, and brought out the rest of the gear to the new location.

Sure enough, after a few minutes of respite the skies opened up again, but although the antenna was getting wet, the radio, power supply, and my iPad (used for logging) were dry. (As you can see from the photo, I did have a towel ready, just in case.) I got on 15m at just about 21:00Z and called CQ and was answered by a station in Brazil. Being in Costa Rica, that wasn’t quite the DX that I was hoping for, but very shortly after that I got spotted on the DX Clusters and started getting a lot of calls from Europe. All told, I was on the air for about 40 minutes (we had plans and I had to get ready) and worked 33 stations that day. (I’ll have some details about the countries I worked in a future posting.) Although I’ve worked from a DX location before (as ZF2DK), this was the first time that I ever had what I would consider to be a full-blow pileup. I think that I did fairly well in managing things, managing to at least get enough of a partial call so that I could respond back with “the station ending in xyz only please” on almost every call. I don’t have enough experience yet to be able to pull full callsigns out of a pileup every time, but I know that’s something that comes with experience. By the second day of running stations, I could tell that I was doing better.

Part 2 of this series continues here.