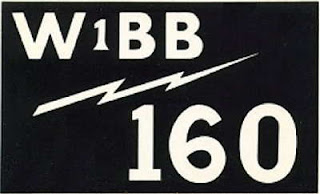 Last night saw the October 'pre-Stew' 160 m CW contest. Technically, it's supposed to be a bit of a warm-up for the real 'Stew Perry Contest' (SP) in late December but it 's really just an excuse for 160m diehards to get back on their favorite winter-time band a bit earlier than normal. After a noisy summer with few DX opportunities, most topbanders are chomping at the bit for any kind of 160m action!

The 'Stew' is my favorite contest of the year and is probably one of the fairest in terms of scoring ... unlike many contests that favor location and ham density, everyone is on a level playing field in the SP. The contest exchange consists of Grid Locators only, and the number of points collected for each QSO is based upon the calculated distance between the two respective grids ... nothing could be fairer and it would be wonderful to see other contests adopt this scoring format.

Stew Perry, W1BB, was a very early proponent of the 'gentleman's' band and was instrumental in popularizing its recognition as a challenging part of the spectrum ... a part very capable of DX opportunities for those that liked to work for their reward. He organized regular Trans-Atlantic DX tests back in the 30's when few saw any merit in the 'topband' other than as a local ragchew band for phone operators. He produced a regular 'DX Bulletin', mailed free-of-charge to interested 160m operators, providing news and information on 160m activities around the world. He had a wonderful QTH, with his 160m station set up at a local lighthouse on the edge of the Atlantic ocean. Those that knew W1BB described him as a true 'gentleman', always willing to help out newcomers and share his vast knowledge of topband quirks with others. In 1976, W1BB was awarded 160m DXCC #1 ... proof that 160m was more than just a band for late night ragchewers.


My first 160m contact was made in 1964, as a teenager, using a poorly-modified Heathkit DX-20 and a VF-1 VFO. With my end-fed longwire, I struggled to work California, but recall the great sense of achievement of working on 'topband'! To make my 160m experience even more memorable, I even heard W1BB himself, late one Friday night, on A.M. phone! I was hooked, and ever since, 160m has been my favorite band to operate on in the winter months.

So there's still time to throw up an antenna and get your feet wet on the coming topband action. Perhaps a start on your 160m W.A.S. award ... a challenging place to begin and one that would likely bring a broad smile to 'Mr. 160' himself, Stew Perry.
Steve McDonald, VE7SL, is a regular contributor to AmateurRadio.com and writes from British Columbia, Canada. Contact him at [email protected].