The Month of October

It’s been a busy month starting a new West Virginia Chapter of the NAQCC Club. I’ve not made a blog entry in almost a month but starting a new group is always time consuming and I feel the club is on it’s way now.

The following is a copy of what has been happening in October with the West Virginia Chapter of the NAQCC Club. It should appear in the next newsletter of the NAQCC club. This free newsletter is full of information about our state chapter club activities in Western Pennsylvania, Texas, Florida, West Virginia, and Europe. It’s a great read for QRP’ers specializing in Morse Code.

First of all, let me offer a warm welcome to the following new members and those who have expressed an interest in the WV Chapter of the NAQCC club. I‘m looking forward to your participation in the club activities and thank you for your membership. 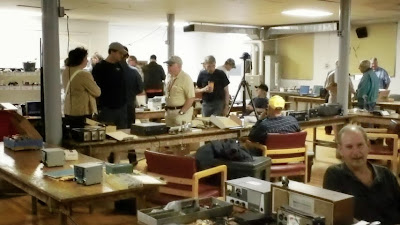 I’ve been networking this month and since the beginning of October I’ve added several friends to our e-mail and membership lists. I hope other members in West Virginia will do the same with their friends and acquaintances who enjoy Morse Code as their primary operating mode at 5 watts or less of power.

If you have WV CW QRP friends; let them know about our club.

Several things happened this month in West Virginia. I drove to Mineral Wells WV early this month on October 12th and attended the Parkersburg Hamfest. I had the intention of meeting Steven (KC4URI)  and we had a wonderful talk about the radio hobby. I look forward to many more of the same.

While at the Hamfest, I also met WA8WV and W8IW (from the Charleston area) who were checking cards for the ARRL DX and WAS award program. I might also add they both offered me the use of some really good “beam antennas” for my QRP work and  I intend to be knocking on those doors soon. Thank You! 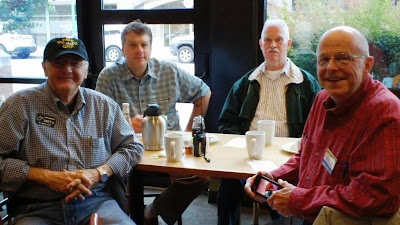 A few days later, a small group of us had a breakfast meeting on October 16th  at a local restaurant which was attended (left to right) by myself (N8ZYA), Eric (AC8LJ), John (W8GDP) and Jim (NX8Z). I’ve been gathering information from these club members, and as a result, we had lots to talk about while we ate breakfast.

We’ve made a decision to have a weekly NAQCC WV Chapter net on Tuesday evenings at 8:00 PM (local time) on the frequency of 7060 MHz. I hope to hear more of the folks up in the Northern part of the state at that time. 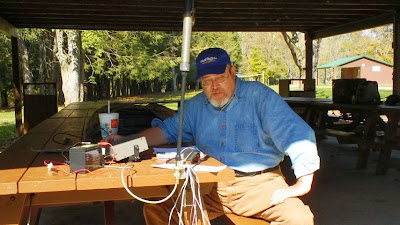 I met up with Steve (KC4URI) at the Cedar Lakes Conference Center on Friday Oct 18th for our first “outing”. 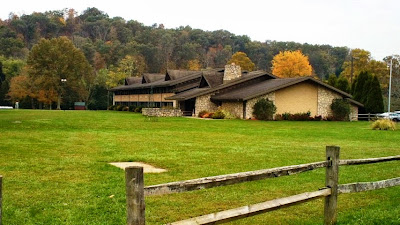 I found the Cedar Lakes Conference Center to be a great place to operate QRP radio because of the low noise level and it’s inherent scenic beauty. It’s ideally situated about equal distance between Charleston and Mineral Wells and about a half hour drive from both locations. 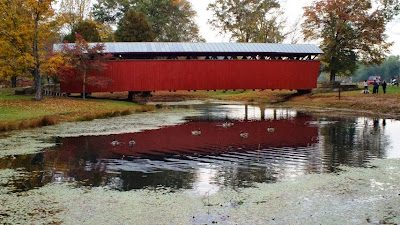 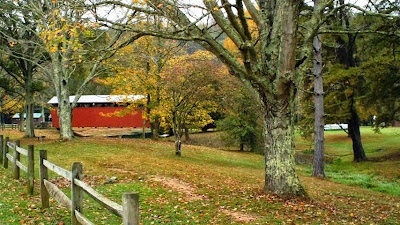 I’ll try to do more of this with out future outings to get others involved from different parts of the state. I realize we have many members in the northern part of the state which is a bit too long of a drive to attend a gathering near Charleston.  

We operated for around three hours at Cedar Lakes, and afterwards, the log book on 40 and 20 meters looked like this: 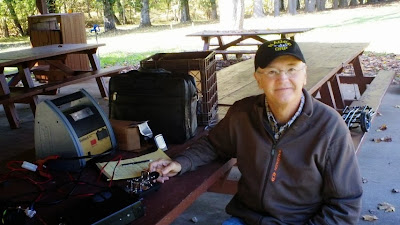 I was amazed at the difference between a dipole antenna at 20 feet and 40 feet. I was also astounded at the difference between the noise level in the country verses the city. The noise level at Cedar Lakes was nearly “zero”. My first shot over the cedar trees left the 40 meter contacts at the mercy of some low hanging 20 foot limbs. Switching over to 20 meters, I put another line over the 40 ft crest of another section of the tree.

Although I concentrated on the agreed 40 and 20 meter frequencies, I could have easily worked DX on 20 meters with about 3 watts. I kept hearing a distinct PA3 (14.060) station in the Netherlands. There were also several IK stations on the lower CW section of the band.

My last “official duty” of the month was the “first” WV Chapter NAQCC net on October 22, 2013 which was Tuesday night at 8 pm.  As noted above, I’ve decided to do this weekly net on 7060.  (plus or minus) My location in the center of town, with the eleven story apartment building next door, leaves much to be desired for a net control operator, but I was surprised to hear seven stations. I must admit that operating from Cedar Lakes, where the noise was practically zero, spoiled me.

My congratulations to all of the stations who had the patience to work me. Propagation is a strange thing at times ……N4OLN in Atlanta Georgia was the winner with the best signal, and amazingly, the longest distance this evening.

I’m looking forward to next month but until then, this month has been a good one for us. My thanks go out to all those who encourage and support me in this new WV Chapter of the NAQCC club.

You can keep up on our local chapter activities at this link: