The popularity of web videos and podcasts means that most ham radio enthusiasts who want to use sound card digital modes no longer want to dedicate their computer’s built-in sound card for that purpose. The usual solution is to buy a purpose made interface such as a RigExpert or SignaLink (expensive but highly recommended by all who own one) or an external USB sound card. However a great many people claim that the cheapest USB sound card “dongle” costing just 99p on eBay is good enough. Take it from me, it isn’t.

I have had several online discussions bordering on arguments with self proclaimed experts who claim that the sound chip in these cheapo “dongles” is exactly the same as the one in a £100 SignaLink USB interface so the £1 dongle must be just as good. I have no idea if they are right about the chip. What I do know is that when I played back a recording of very weak CW using one of these devices all I could hear was noise. And when I tried to use one of these devices to decode a fast digital mode such as packet, I decoded nothing at all, not a single packet, even though I could see the signal loud and clear on the waterfall. 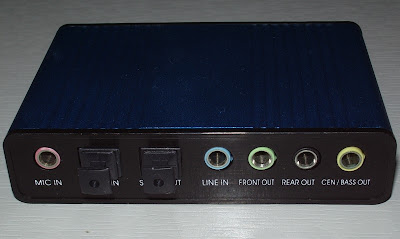 I have tried a number of these cheap devices. I bought two of the cheap thumb sized “dongles”. One I threw away after seeing the noise it introduced on the waterfall. The second I bought thinking it would be good enough for computer audio, which it was, but had to throw it away when it failed after a week. I also spent a bit more on a slightly fancier sound card “dongle” which I currently use for computer audio, but which still displayed the inadequacies on weak signals and fast data modes that I have mentioned.

Finally I tried the device pictured above. It doesn’t have a brand name but can be readily identified from the picture and is advertised on eBay as something like “USB 6 Channel 5.1 External Sound Audio Card For Laptop”. It costs around £8.50 including postage from China. It comes in a small extruded aluminium case, has connections for SP/DIF input and supports sample rates of up to 48kHz so it would probably be suitable for basic SDR use. It has decoded every digital mode I have so far tried it with. And it’s small enough to build into your own box to make a DIY SignaLink.

It comes with a mini-CD containing a Windows driver. This installs a small mixer/control panel application that loads in the task bar and provides the usual control over the various sound effects. I used one of the start-up program managers (Autoruns) to remove it and find that it works perfectly well for my purposes without it, just using the standard Windows mixer settings. This is certainly preferable to the Creative SoundBlaster USB device that some people recommend which allegedly installs 200MB of junk on your hard drive.

I think this is probably the cheapest external sound device that is worth using for sound card digital modes. I’d be interested to know of alternatives, but please don’t recommend something unless you have actually done A/B comparisons with a known good sound card using weak signals, fast modes and different software packages. I hate to think of the frustration some people must have experienced following the advice of the self proclaimed experts, buying one of the £1 “dongles” and wondering why they can see a trace on the waterfall and can’t decode it.

4 Responses to “The best cheap sound card for digimodes”