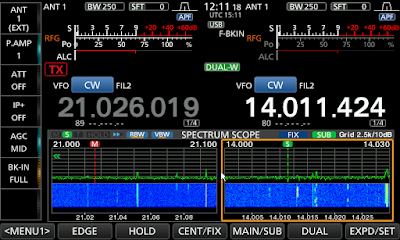 During my adventure with the 13 Colonies event, I was able to see the advantages my Icom 7610 brings to the table. The name of the game with the Colonies event is to try to log all 13 (Clean sweep) colonies stations. At the get-go of the event for me, the stations were very easy to log but as you come closer to your last 2 colonies it became a bit more tricky. This is were my 7610 gave me a great advantage. During this event, I learned very fast that the best way to log a station is to find them calling CQ before they are spotted on a network. Once they have been spotted the crowd starts to gather and my success goes way down for a contact.
The 7610 has what is called "Dual watch" this utilizes the two completely independent receivers in the radio. This allowed me to leave VFO A (listening with my left ear)  on a spotted frequency listening for a lull in the activity. VFO B (listening with my right ear) was moving around on the same band or different band hunting for a nonspotted colony station calling CQ. If VFO A was getting really crazy with callers but I wanted to stick it out for the just in case moment, I am able with a push of a button to mute VFO A. With each receiver you have filter, twin passband, NR, NB and antenna choices you can make to help out with you dealing with band conditions. Finally, as you can see from the screenshot above I was able to activate the "Dual scope" option and have a separate waterfall for 20m and 15m or you can do it for the same band as well. I have always been an Elecraft person (I still have the KX3 so I guess I still am) but I am very impressed with the 7610 a great bang for your buck!
At this point, I am looking for K2C out of RI and GB13COL in England and I want to continue using CW as all other stations were logged using this mode. At this point in time I have found that K2C spends little time on CW and as for GB13COL many have said they just cannot hear them and I concur. It 's getting down to crunch time as the 7th is the last day so let's see if the ham gods are smiling on me?
Mike Weir, VE9KK, is a regular contributor to AmateurRadio.com and writes from New Brunswick, Canada. Contact him at [email protected].

4 Responses to “The 13 Colineis Event continues……”