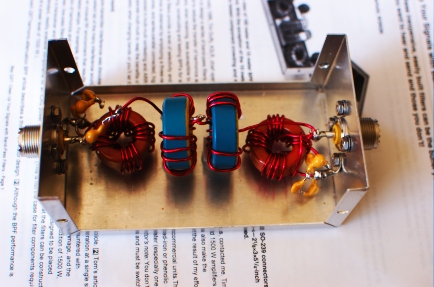 After about six years of sporadic effort, I finally finished the W3NQN filter set by building the 10- and 15-meter filters over the past two weekends.  Now I can operate SO2R with impunity on all bands.  Several band combinations are still problematic, but those are problems that filters can’t solve. 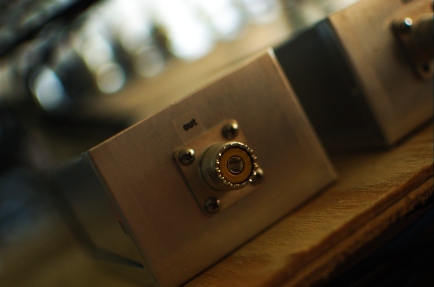 Because the geometry of our home does not permit me to have a walk-behind station desk, I had to attach the filters to the mounting board by laying on my back with a right-angle drill.  That sort of thing is always a bit exciting!

Pin 1 and a Pound of Ferrite 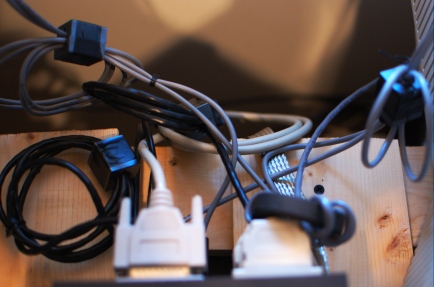 The commonly-held wisdom goes that an “ounce of prevention is worth a pound of cure.”  As things typically go around the K8GU station, 50% of problems are solved by prevention and 50% by cure.  Today, it was a cure.  Readers of the blog are no doubt aware that I have a recently-discovered problem with QRM between my radios when they were on the 20- and 40-meter bands.  (I didn’t notice this problem until I got both of the TS-930′s up and going again; so, it’s probably the result of the “new” station location and arrangement.)

I pulled the 20- and 40-meter W3NQN filters out of the circuit and measured them.  They benefited from a little tweaking, but nothing that would have caused the problem.  I put them back in and was rewarded with much lower VSWR in across both bands.

It didn’t matter which of the radios was on 20 and which was on 40, the interference, a popping hash that followed the leading edge of my keying, was there.  The next step was to put a dummy load on the output of one radio, then both radios.  Even when transmitting into the dummy load, the interference remained.  This suggested to me that the problem was very close by.  All of my gear is bonded together with heavy straps.  So, I wasn’t too worried that it would be difficult to find.  I noticed that the 40-meter LED flickered on my KK1L band decoder box following my keying.  It became the prime suspect.

I found some split beads that AD8P and I bought from AA1K in the Dayton flea market a few years ago.  I’m not sure what mix they are, probably 43 or possibly 77.  Winding a few turns of the band data lines from each radio through the beads knocked down the interference a good bit.  I slapped some more on the audio lines going to the Heil HCS that I use for SO2R audio and the interference disappeared.  But, I was using the dummy load on one of the radios.  As soon as I went back to the external antennas, the inteference came back.

Next, I dug out a couple of the 2.4-inch diamater mix-31 toroids that I purchased in the first K9YC “group buy” of these parts back in 2005 or 2006.  I wrapped the DC power supply line to the KK1L box and the AC supply to the HCS.  And, the problems pretty much disappeared.  At least one of these is due to what K9YC calles “the pin 1 problem.”  Basically, if the shield is brought through the metal enclosure to the circuit board, it conducts (noise) current that’s riding on it into the enclosure.  So, I need to dissect the HCS and KK1L boxes to see if I can find a deeper fix than just slapping ferrite on the outside.

But, there’s hope for SO2R in this week’s NSL!