Radio activity around here was asymptotically approaching zero until this past weekend when I managed to put about two hours into the ARRL January VHF contest.  In brief, here’s what’s happening around K8GU:

And so it goes, time to punch my card…

When I got home from work last night I quickly mowed the lawn because the weatherman said there was a sixty percent chance of rain on Saturday and Sunday and I wanted to get ahead of the game. After working in the yard I plopped down in the shack to see if I couldn’t make quick work of the W1AW/1 and W1AW/9 portable stations.

Worked them both within a whisker of each other on 40 meter CW then worked them both again later on 80 meter CW for insurance. I didn’t think the Indiana station would be difficult, but I wasn’t quite as confident about Rhode Island but all’s well that ends well and both are logged and another week of the QSO Party is behind us.

Given that the weatherman said it would probably rain, I shouldn’t have been surprised to wake up this morning to sunshine and blue skies. I swear the weather prognosticators are getting worse at their jobs even as technology has delivered into their hands unfair advantage over the elements.

Brenda says it’s because the weather has become “news” and all of them want to be the first to report a bad storm using giant touch-screens powered by super, frappa, chappa, slappa doomsday doppler radar systems.

Anyway, with the sun shining we hit the local farmers market early this morning and picked up more sweet corn, tomatoes, and a great big melon. And get this, the guy who was selling from the back of his melon truck, told everyone who would listen that he would be back in two weeks — with apples.

Yep, the days are ticking away and the orchards around here are near to busting with autumn goodies. Another cold snap is due to arrive here on Monday and it looks like the first few nights of August could break a few records.

Not to worry though, I’m certain there remains yet a few more days of blistering heat before Summer yields to Fall, but we’re on the backside of 2014 with school days and sweet apple cider coming up fast.

There’s no way to sugar coat this.  My marriage of nearly 21 years is over and my XYL and I are separating.  It’s been a rough past two months leading up to this (actually, come to think of it, maybe it’s been a rough few years), to the point where I’ve been physically ill thinking about everything from family to how will the grass at the house get mowed.  The emotions involved are overwhelming…. sadness, hurt, anger, hate, bitterness, uncertainty….relief…. But with every chapter that ends, a new one begins.

I’ve been house and building lot hunting, and getting an education on home owners’ associations, the bane of many a radio artisan.  I have a few good real estate prospects, one house in particular is ideal for an amateur radio QTH as it has a relatively high elevation, is wooded, has few other houses around, and I have information from a good source that the HOA is rather loosey-goosey.  It will be quite awhile until I can get a tower up again, so it’s back to basics with dipoles strung in trees.  Basics and simplicity appeal to me at this point in my life.  Now that I’m in my 40s and my daughter is heading to college next year I don’t need much of a house.  It seems most nice houses on the market here are just too big for me.  I’m looking at house plans in case I need to construct a home, as a “Plan B” option.  In any case I’ll probably settle on something that would normally be classified as a vacation cottage.

Despite the gut-wrenching situation with the marriage and my family, I’m looking forward to this transition and journey.  Outside of the mundane legal and administrative tasks that need to be completed and the grieving process with myself and the family, I’m somewhat excited about the transition.  While I’m losing a lot I’m gaining freedom and the opportunity to retool my life, simplify, be true to myself, and be happy.  Freedom and happiness have a lot of value, more value than material items.  My bucket list has expanded significantly and I plan to accomplish everything on the list these next 40 years.  I’m sure there will be a significant-other YL in my future after things settle down.  I hope to chronicle my journey here in the coming weeks and months.

Today I’m off from work, getting stuff done around the house and preparing for Field Day, one of my most favorite events of the year.  See you on the air this weekend! 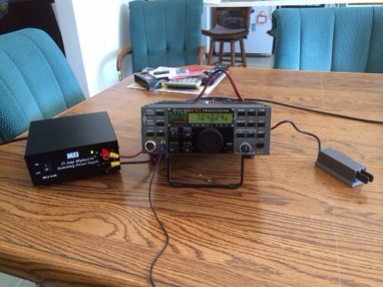 Sarah, Evan, and I had the opportunity to go to her parents’ place for the Easter holiday weekend. Since the trip coincided with the Michigan QSO Party, I decided this might be a good test of the portability of the K2. Unfortunately, I was unable to operate much longer than a half hour but I had some fun on 40 meters and tried out N3WG’s (Pignology) HamLog for logging. Neat stuff.

Despite the lack of activity on the blog, I’m still alive and QRV on the radio.  The blog had to wait.  Here are some recent activities around K8GU:

I’ve never been into making New Years’ resolutions, but some projects are in order for the next few months:

So, Happy New Year and I hope your 2014 holds as much interesting and promising to do as mine does!

I first experienced the passion of those pursuing RSGB’s Islands on the Air (IOTA) programm(e) when I was active from Adak (Andreanof Islands, NA-039) in August/September 2012.  Matt, KB9UWU, and I made some tentative plans to do the 2013 RSGB IOTA Contest from NA-139 (Maryland State East, Assateague), returning to the site where he and W3CF had done the same contest over a decade prior.  During the planning stage, I cast about for the nearest IOTA groups to activate.  For the DC area, the easiest groups are surrounding the Delmarva Penninsula, NA-083 (Virgina State), NA-139 (Maryland State East) and NA-140 (Maryland State West).  We did not execute the plan to go to NA-139 and I had really given up on the idea of doing anything for the IOTA contest…

That’s when work interviened.  I scheduled a trip to Greenland (story about this to follow in a future posting) leaving late on Sunday of the IOTA contest weekend.  My wife Sarah had a cousin with a baby shower in Ohio on Saturday…so, we did the logical thing…packed her and Evan off to Ohio on a Saturday morning flight.  After dropping them off at the airport, I headed to the Eastern Shore for some IOTA action.

The principal mission for this trip would be to understand the difficulties in activating NA-140 and to make it widely available to the IOTA community because it is apparently rather rare (25% claimed, versus 19% claimed for Adak).

The station setup was simple and typical—an Elecraft K3 and an updated version of the GU Special.  The GU Special had just returned Tuesday from KL2HD’s KL7NWR expedition to NA-064 back in June (he had left it on the research ship until it returned to port, so technically, it’s probably visited some other rare IOTAs, too).

In order to avoid discharging the car’s battery, a mistake that could leave me stranded far from home, I lugged along a few SLA batteries to power everything.  I selected a couple of candidate sites using aerial imagery and ended up using my preferred site, which was very accessible to saltwater and the road, making it trivial to setup the radio in the car and
the antenna on the beach.  I now understand why NA-083 and NA-139 have much more activity—they’re close to civilization!  Nevermind, I love the middle of nowhere.  So, it was fun.

I configured the antenna for 20 meters and launched a few CQs on CW.  It took a while to get a run established, but after that the pileup was pretty much non-stop for about 3 hours.  I even worked some JAs, which was pleasing considering that NA-140 is very rare there and I was not QRV during the peak hours for JA.

Unfortunately, I hadn’t rigorously tested the batteries beforehand (except for one) and only one (the one I tested, of course) of the five performed well.  One performed acceptably and was relegated to running the inverter for the laptop once the battery warning came on.  Even the “good” battery sagged under load at 100w transmitter power.  So, I cranked the K3 down to 50w and let it rip.  That was enough to produce a commanding signal in Europe, with RBN Skimmers showing my signal peaking at 47 dB SNR with many hits in the 30s of dB.  As Matt said when we talked after I returned home, “I have trouble getting those kind of numbers with a small beam and the legal limit!”  Verticals on saltwater rule.  End of story.  Hearing was a different issue as there was some line noise and the occasional passing boat, who provided more QRM in the audio range than the RF range.

My pileup thinned out a little bit around 2020 UT and I was exhausted.  Evan didn’t sleep well the night before and that didn’t help anybody else sleep, either.  Plus, it was hot, even with the nice breeze and pleasant temperatures.  If all of that wasn’t enough, the battery in my mobile phone had discharged, the battery in the laptop was nearly dead and both the K3 and the inverter began
throwing low-voltage alarms.  It was time to pack up.  Fortunately, the GU Special deploys and stows in 15-20 minutes, so it wasn’t bad.

I ended the three-hour window with 215 QSOs and 11 (!!! that’s what you get for CQing the whole time) island multipliers, all on 20 meters.  I’ll take it!  Thanks for the QSOs.  I just ordered cards today and they should be printed and ready to send by mid-August. 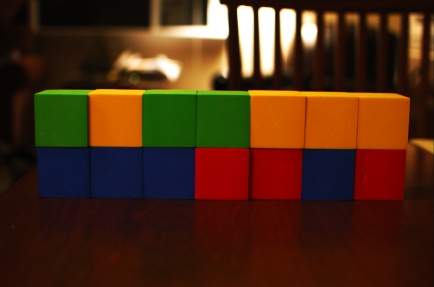 Teaching Evan the basics of radar signal processing with this baby-block 7-bit Barker code and its matched filter.