My vision and steadiness of hand have improved to the point that I am able to build projects! Here is a picture of a switchbox I made for my Elecraft K2 a couple of days ago which allows me to switch the audio input source from the microphone to the computer sound card. 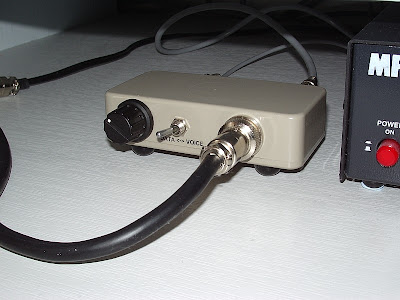 One of the niggling annoyances of the K2 is that it does not have separate inputs and outputs for voice and data modes. Most users carry out one of several published mods to obtain a fixed level audio output for the computer. Mine is tapped off the KAF2 filter module and runs to an RCA phono socket on the back panel. But for transmit most people just swap the mic lead and data lead over.

I used my K2 like that for years, though it wasn’t a great hassle mainly because I hardly ever used a microphone anyway. But I finally decided to come up with a better solution – hence the switchbox. It was easy to make and I thought it would be within my capabilities. Here is a picture of the internals. 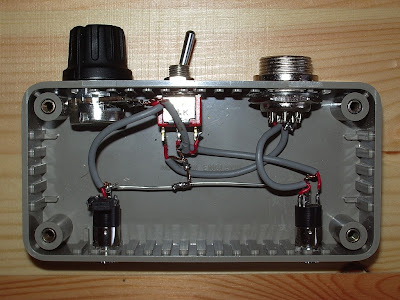 In one position of the front panel switch the microphone signal is switched straight through. In the other, the audio comes from the computer sound card headphone output via a potentiometer. Since taking that picture I added some resistance to the hot side of the pot so the control can be used over a greater range as the K2 mic input is very sensitive and needs some attenuation. As you can see, I don’t bother with isolating transformers. I’ve made dozens – well at least a handful – of computer/radio interfaces in my time and I have never, ever found the need for one. YMMV.

To celebrate the restoration of my constructional skills I have ordered a W5OLF WSPR beacon kit. John Harper, AE5X, recently reviewed it and wrote that it took him 50 minutes from starting to build to receiving his first spot. So I figured it shouldn’t be too difficult, though it will probably take me longer than 50 minutes. It would be nice to successfully complete a kit before I start undergoing the treatment that I expect will make me too tired to do all the stuff I am managing to do at the moment.

After breakfast this morning I went up to the shack as usual. I switched on the computer, switched on the main power supply and switched on the Kenwood TM-D710. When Windows came up I started my VHF instance of APRSIS32 for my local APRS gateway. Then I switched on my K2 to start the HF gateway. The LCD showed the usual “Elecraft” but then the segments went crazy and the radio emitted a noise that can best be described as an endless fart.

I switched off. Then I realized that I had forgotten to switch on the K2’s power supply. I switched it on, then I switched the radio on again and this time it started up normally. Phew! Then my fuddled brain worked out that this must mean the K2’s internal SLA battery has finally given up the ghost.

I built my K2 in 1999. Originally only the basic radio was available as a CW-only kit. Other options were soon added including the KSB2 module for SSB, the internal ATU and an internal battery pack. I added these options as soon as they were available, which must have been around the end of 1999 or early 2000, so the battery must be around ten years old.

As it happened I have rarely used my K2 portable so I have made little use of the battery pack. I used the radio in the field once earlier this year. The previous occasion on which I ran the K2 from the battery was during the floods a year ago when the power went off for several hours and I was able to experience what the bands were like without all the local QRN. Ten years is a very good life for an SLA battery and I wondered when it would fail, but I hated to throw it out while it was still doing its job. It seems that time had finally come.

I removed the top cover from the K2, disconnected the cables and lifted it off. Then I undid the screws securing the aluminium bracket that holds the battery in place. I noticed a small patch of corrosion in the area adjacent to one of the terminals, and when I removed the battery I noticed a drop of liquid in the same place. The battery had started to leak. I had got to it just in time. If my fuzzy-headedness hadn’t caused me to turn on the K2 without the power supply I might never have noticed the problem until it was too late and some of this electrolyte had dripped into the radio itself!

But it isn’t just the K2 that is getting old. I am, too, and I hate it. I’ve never had particularly good co-ordination but it seems to be getting worse. I can’t use a Morse paddle now and I can’t send faster than 12wpm with a straight key. Sometimes I have days where I’m even more clumsy than usual and my hands shake too much to do any constructional work. In that state it’s impossible to hold nuts and washers in hard to access positions while you turn a screw from the other side. I’m having one of those days today and I found that I couldn’t put the battery cover back. So I’ve put the K2 in a drawer until a day when I’m feeling sharper. Hopefully I’ll be able to give it a realignment at the same time, something else it probably needs after ten years. Until that time I will be off the air on HF APRS.

Comedy in the woods

As someone who likes a walk in the great outdoors I enjoy reading accounts of people who take their radios out into the countryside for a bit of QRP fun. Today I thought I would try to emulate them. However although I did make a few contacts the attempt was a bit of a disappointment on several counts. Even the photos I took with my camera self-timer were disappointing as the operator completely obscured the radio and a picture of myself sitting on the ground at the foot of a tree apparently talking to my hand is not something I feel should be preserved for posterity on the internet.

As the CQ WW WPX SSB contest was on I thought this would be a good opportunity to make some QRP SSB contacts. The batteries in the FT-817ND seemed to be less than fully charged, and the battery endurance of that radio is poor enough already thanks to its power-hungry receiver. I decided to take my K2 instead, which would give me the benefit of 10W output and really punchy audio. So the local dog walkers witnessed the odd sight of someone setting off up the forestry track into the woods near Watch Hill wearing boots and rucksack and carrying a small Pelican case.

Fifteen minutes later they would have witnessed the even odder sight of the same person trying to throw a stick with a bit of wire attached over a tree branch. Now I know why the MP-1 was invented! After about ten minutes of persevering I managed to get the wire over a branch about 12ft high. The stick hung down the other side tantalizingly out of reach and I spent the next five minutes trying to hook it with the end of my walking stick so that I could pull the wire taut and secure the end of it.

I had previously prepared two lengths of wire for my portable antenna. One is about 22ft long, and has a few feet of nylon cord attached to the end for tying to sticks or rocks to hurl over branches and then secure in position as the radiating element. The other is about 16ft long and is laid out along the ground as a counterpoise. They are fixed to the red and black terminals respectively of a BNC to binding post adapter which is plugged in to one of the antenna sockets of the K2. The reason for the selection of these particular lengths is that I seem to recall them being suggested by Elecraft as good lengths to use with the T1 portable auto-tuner.

There are no picnic benches or tables in the forest so I just sat down on the ground and used the Pelican case as a table. The K2 sat on that, and the antenna ran off directly behind it at about a 45 degree angle, over the tree branch and down a few feet at the other side. The counterpoise ran off at right angles.

I switched on the K2 which was still on 15m from my last mobile outing and immediately heard many strong signals. However signals didn’t seem as loud or as plentiful as I would have expected during a major contest. I pressed the Tune button and the K2 ATU whirred away and finally delivered its verdict: 9.9:1! It couldn’t match it!

I didn’t hear anything on 10m so that wasn’t worth trying. I got a usable SWR on 17m but there was hardly any activity on that band. On 20m the best SWR was between 2:1 and 2.5:1, and on 40m I managed to get 1.5:1. Unfortunately the K2 is a bit SWR-sensitive – something I never noticed during the years I used it as my main home station when I could always get a 1.2:1 or better – and it flashed up Hi Cur (high current) when I tried to use 10W on 40m. So I had to back my power down to use that band, which didn’t help matters.

I made nine contacts in less than an hour’s operating, which included a break to eat my sandwiches:

But these were not nice easy contacts like I made using the same radio and the same power from the car using the MP-1 antenna. My thanks, as well as my apologies to the stations that wasted valuable minutes trying to pull my call and serial number out of the ether.

It was getting a bit cold and I felt a few spots of drizzle so I decided to call it a day. I think I’ll stick to taking VHF on hikes in future.