German, Swedish, Danish, Norwegian, Finnish, and some Spanish characters in the display are now supported by the K3NG Arduino Open Source Morse keyer. I have worked with OZ1JHM, Hjalmar and K3NG, Anthony, in order to implement this using the 8 custom-designed characters of the LCD display (based on the Hitachi HD44780). This should satisfy the call I had for such support here on this blog last year: Which non-English Morse characters are the most important ones?

Here are examples using the phonetic alphabets of these languages.

In addition, Ü, Ñ, Å are always supported. This makes it possible to write the following without changing language, so Spanish speakers should also be satisfied: 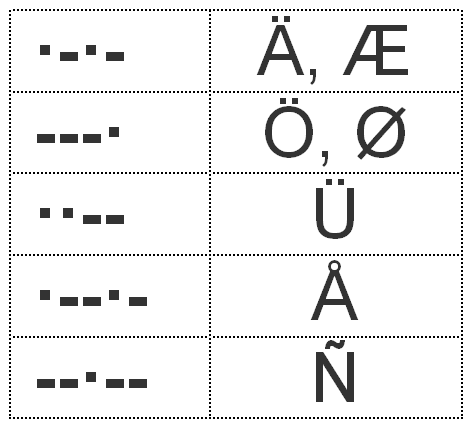 The most likely combinations of characters are:

It should be noted that Ö=Ø and Ä=Æ when it comes to Morse code (and meaning).

It is also possible to support the CH which has its own Morse code (—-), but so far I haven’t been able to find a symbol that represents this letter. Neither should it be much of a problem to support other letters also, such as French accents and the C cedilla (À, È, É, Ç). All it takes is to generate a bit pattern using an editor such as the one provided here and replace some of the above characters.

I am very happy for the collaboration that took place to make this possible and not the least to Anthony, K3NG for making his work available and his willingness to accept ideas for changes and improvements. For the time being, this feature is in the beta version, but hopefully it will eventually find its way into the official version. It can be enabled by uncommenting: