There was an announcement on the RSGB and OFCOM sites advising some UK full licence holders that 70.5 to 71.5MHz is being made available for one year by special permission for further digital experiments, a bit like 146-147MHz here in the UK.

I can see no good justification for this 1MHz of spectrum. 2m was already under-used and the 146-147MHz allocation is probably being used by a tiny handful of people from time to time only.  DATV tests could quite as easily happen at 70cms.

I can think of far better parts of the spectrum OFCOM could have allocated e.g 100kHz around 40MHz (for Es propagation experiments), 73kHz, below 8.3kHz and a contiguous 5MHz allocation. Oh no, these require a brain to be engaged by OFCOM people.

Maybe this is an April fool’s wind-up, although  I suspect it is true.

Surely if OFCOM wants to further real experimentation in radio science there are better ways of going about it?  Yet again, I am totally unimpressed. Between OFCOM and the RSGB, I think this is, yet again, a stupid stupid decision. So we now have 2MHz of extra spectrum for 12 months that a very few might use. Big deal. OFCOM, engage brains, think radio science. If you want to help grow future engineers that we so badly need, these allocations will not help at all. Think again!

A couple of years ago we changed our broadband Internet service provider. The new provider did not support a static IP address. I have a QNAP network attached storage device which is primarily used for backup. However, it’s actually a Linux box that runs the LAMP (Linux, Apache, MySQL and PHP) software which I occasionally use as a web server for experimentation. I sometimes need it to be accessible from the internet. So I opened a free account with DynDNS in order to access the server using a host name.

Some time last year after I came out of hospital I started to receive emails from DynDNS informing me that my account was being disabled due to abuse and inviting me to open a paid account. As far as I could tell, the only “abuse” was that my script to inform DynDNS of my current IP address was running more than the number of times DynDNS permitted. I had no idea why it should start misbehaving like that and cynically thought it was just a ploy to convert free users to paid subscriptions. I was in no frame of mind to deal with the problem, nor to dig into my wallet, so I simply closed the account and had done with it. This would have had the effect of breaking some APRS-related functions on my site but I had other things of greater concern to think about.

A few days ago I decided to look into why the CDGVHF ANSRVR group was not sending any messages. ANSRVR is an APRS tool used to send APRS messages to groups of interested people. CDGVHF stands for Cumbria Dumfries and Galloway VHF group and it is intended to disseminate alerts about VHF and UHF openings in the Cumbria, Dumfries and Galloway area (grid square IO84.) It’s essentially a filter that acts on emails sent out by DX Sherlock and converts them to APRS messages addressed to ANSRVR. I could, of course, just have the emails sent to my smartphone. But it’s more fun to make use of ham radio!

I looked for an alternative free service to DynDNS and decided to try No-IP Free. As far as I can tell, No-IP won’t accuse you of abuse for updating your IP address too frequently, in fact its client software appears to do this every few minutes which seems like plenty. It does have a requirement that you confirm your account is being used once a month, which could be a bit annoying, but I’ll see what happens at the next update.

In the meantime, CDGVHF is now sending out propagation alerts again. To receive alerts of VHF and UHF openings in the IO84 area just send an APRS message to ANSRVR with the text CQ CDGVHF. You’ll need to repeat this from time to time as the server unsubscribes you from the group after 8 hours of no activity, unless you are using KJ4ERJ’s APRSISCE software which can maintain your subscription for you. 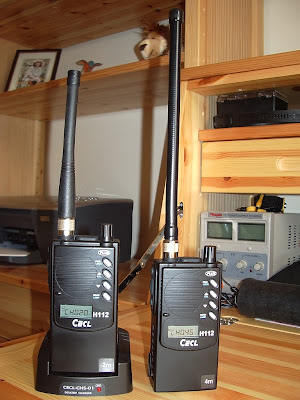