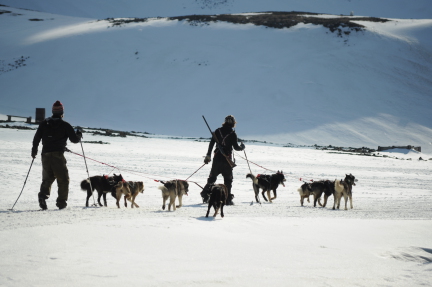 An annually-recurring professional meeting has started to put me in interesting DX locales.  This year was no different: the meeting was held at UNIS (University Centre in Svalbard) in Longyearbyen, Svalbard.  My friend and colleague, Nathaniel, W2NAF, did a semester of his graduate studies at UNIS and was excited to return for the meeting.  He suggested that the JW5E clubstation “hut” (depicted below) might be both an attractive lodging option for cost, location, and of course, radio.  The hut is a bit rustic with no running water but we did manage to maintain a nearly professional level of appearance and personal hygene due to Nathaniel’s insider knowledge. 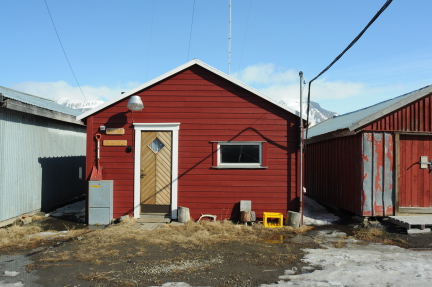 As is typical for the kind of travel I do, there was no straightforward way to get from A to B.  Nathaniel and my flight schedules put us into Longyearbyen (via London, Oslo, and Tromso, in my case) on Friday and Saturday, respectively, giving us a shot at the CQ WPX CW contest.  We elected to operate this under our own callsigns, which proved to be a bit of a limitation since for much of the contest 20 meters was the only band that produced rates.  So, we had to share 20m.  Nathaniel operated high power using the JW5E FT-1000MP mkV and Icom IC-2KL amplifier connected to the JW5E antenna system.  I operated low power with my K2/100 and the JW5E antennas.  He came out a little bit ahead on QSOs and pretty far ahead on points, mostly due to the day of head start and effectively exploiting 20m.  I also worked a lot of empty-calorie EU stations while he focused on 3-pt DX stations.  Despite our initial optimism, neither of us were particularly dedicated to a full effort in the contest.  We both had a bit of trouble adapting to polar day and slept through prime openings on Sunday.

40 meters and lower frequency bands were useless, as were 10 and 12 meters. Nathaniel and I did work each other on 160 with the power turned all the way down.  And, of course we worked each other in the contest for an easy prefix multiplier.  The 12m situation was a little disappointing since I know a lot of people needed JW there.  Had we been there in March, it probably would have been open.  I worked two CTs and that’s it.

During the week of the meetings, I only managed 1-2 of hours operating each day, and Nathaniel maybe a little more.  We developed a protocol of uploading to LoTW first thing in the morning when we got to the meeting (where we had free network access, versus roaming 3G on my phone at JW5E).  Since I don’t use ClubLog, this is a good way for DXers to see if they’re in the log and get a quick confirmation.  As I told a DXer who thanked me profusely for doing it, my employment covers the largest costs of my DX travel and my operating is secondary to my work.  Therefore, I feel no need to extract or solicit donations from DXers. I am ordering cards today and they will be ready to mail in a week or two.

On the last night, I put in a solid 6 hours of operating, making about 600 QSOs in one sitting.  30m was always a struggle with most signals right near the noise level.  The other bands (15/17/20) produced big signals and were pretty easy to work.  I’m always a bit slow to operate split because I don’t want to use more bandwidth than necessary.  With an amp, I could probably have operated simplex most of the time.  Usually once people stop coming back to my 599s or they start duping me mercilessly, I know it’s time to split the pile.

The pileups were generally very responsive to my instructions with only one station really raising my blood pressure to the point that I QRT’ed to cool off.  Based on his QRZ.com profile and how loud he was compared to all the stations he was obliterating, he was running as much as 4 kW on 30m.  Good show.

I heard that someone on a DX club e-mail list suggested that I go next to Jan Mayen (JX).  Please negotiate that with my wife and we can work something out. Don’t forget to include that Jan Mayen has one flight per month.  My Norwegian colleagues were amused by this and asked also about Bouvet (3Y).  Only scientists and hams know about Bouvet and Jan Mayen.  Seriously, if I didn’t have a young family, I would consider doing that sort of thing, but I miss them too much when I travel.  The next DX trip will be someplace warmer with regular commercial air service. 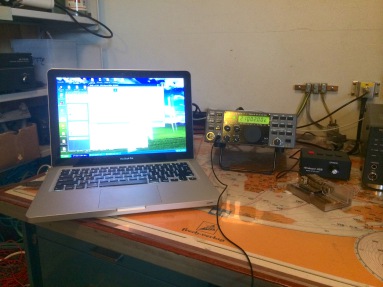 I’m still sort of converging on the best equipment for portable DX operating. While I like the K3 a lot, the K2 is a bit smaller.  In its flight case, it fits under all airliner seats and not just some of them like the K3.  Although it is a stupendous performer, the K2 has some idiosyncrasies occasionally cause me to notice that it’s not as well integrated as the K3 and modern JA radios.  The diminutive size and negligible RF emissions from the MRF-4125 switching power supply are big pros, but I noticed the fan making a particularly awful noise on this trip.  Need to look into that.  The K1EL WKUSB continues to be a star performer for computer and hand keying.  While I love the action of the Palm Mini paddle, the lack of a solid base can be frustrating.  I brought the recently-mounted Schurr Einbau and it sang. Although, it produces the best reactions from security screeners: “What is it?  Is it an antique?”  And, my favorite from a screener in Longyearbyen: “Is that the new iPhone?”

The real stars of this operation were the Etymotic Research MC5 in-ear monitor earphones.  Wow.  I’ve been using them for a couple of months now at the recommendation of someone on the Elecraft reflector and they are my new favorite headphones for travel.  They do excellent with noise isolation on long-haul flights and in noisy QTHs; they reproduce music flawlessly; you don’t have to turn the volume up to 11 to hear with them; and they fit in a tiny little pouch that’s smaller than a deck of playing cards.  And the best part?  They only cost 60 USD.

The GU Special came along on this trip but was not needed since I had access to an OptiBeam for 20/17/15 meters, dipoles for 30/40/80, and a Cushcraft R7 vertical for 40-10 meters.  I was tempted to take my gear on the 8-hr boat trip we took up another fjord.  However, I decided against it for a variety of reasons including the desire to do some birdwatching and look for polar bears—we saw some seals and an artic fox but no bears.  The seals and the fox amounted to no more than a couple of pixels in the photos I tried to shoot of them, even with a modest 200mm telephoto lens.  OK, that’s a short lens by wildlife photo standards.  Please accept this puffin photo in place of a bear photo. 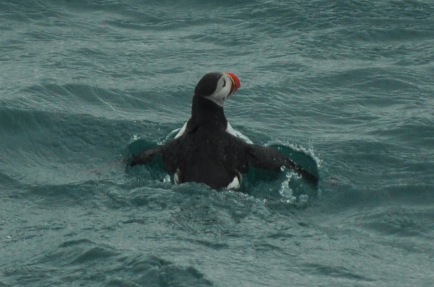 And the Tempelfjorden glacier and sea ice shot from my phone… 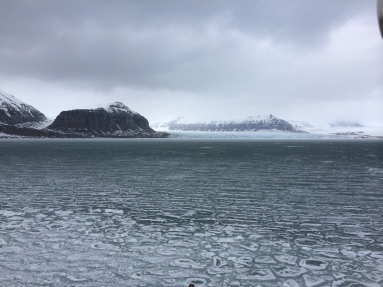 This photo is looking back up Adventfjorden toward Longyearbyen and shows the JW5E tower right near the water in the center.  (The heftier one on the right.) Also in the background are the dishes for the EISCAT Svalbard incoherent scatter radar. 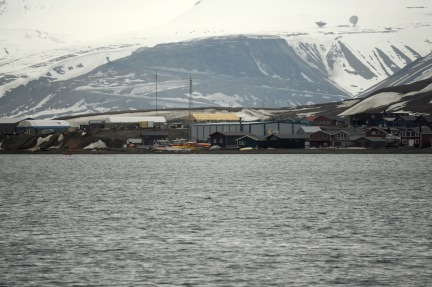 And a photo from our visit to EISCAT in tracked vehicles.  It was practically June and there was a lot of snow on the ground.

Finally, here are two YouTube videos related to our operation.  The first was shot by W2NAF and has a tour of the JW5E station.  The second was shot by KB9UWU during the WPX contest and shows pretty much what 15m was like for me: the band was obviously open but I didn’t have many callers.

Thanks to everybody who stopped by to say hi.  I worked lots of friends on the air from all over the world and received SWL reports from a few more.