Like my good friend Jim W1PID, I also operated portable QRP today.  Like him, I had some success working Germany, Sweden and New Mexico. Unlike him, I did not have a beautiful river and pastoral country views to soothe my eyes.

Nope, I was in the parking lot at work during my lunch break – again.  But also like Jim, I got to deal with the heat.  It was just breaking the 90F (32C) mark when I got out there.  I think the sunshine reflecting back up off the asphalt pavement might be good for another few degrees.  Tomorrow, I’ll have to bring a thermometer with me and find out.

I plopped the Buddistick on top of the Jeep and found that the air temperature was not the only thing that was hot.  17 Meters seemed to be sizzling, too.  I worked two special event stations – the first being DL50FRANCE. 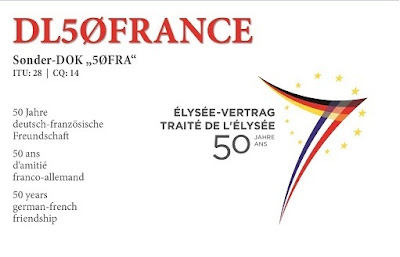 This station is commemorating the 50th anniversary of the signing of the Treaty of Elysee.  That historic document started a period of deep friendship and cooperation between France and Germany.  Up until that point, those two countries didn’t exactly play nice together.

The other special event station I worked, and was also worked by W1PID, was SJ0SOP. This station in Sweden is on the air to promote the Sea of Peace award. 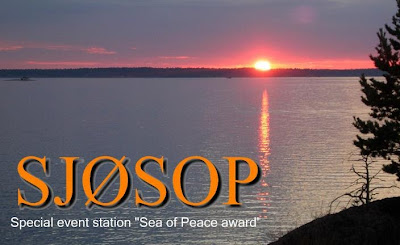 In between working these two special events, I slipped on over to 15 Meters to see if there was any activity there.  That’s where I heard Paul KW7D in New Mexico calling CQ.  He was 599 loud in New Jersey and I got a 569 in return.  We had a brief QSO and I informed Paul that 17 Meters seemed to be a lot more active than 15.  We kept our QSO short so that he could QSY on over to 17 Meters and point his Force 12 Beam antenna towards the DX that was humming on the band.