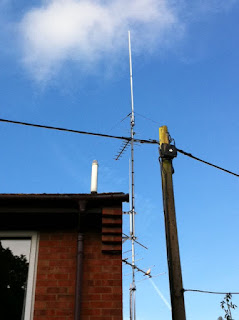 Over the last week, I’ve seen people reporting Es on 50MHz in particular, but by the time I’ve got home, I haven’t had the energy or time to go and have a look on the bands! But this weekend has been good.I’m particularly pleased to have had the opportunity to play as about 2 weeks ago, I got a Diamond V-2000 vertical for 50/144/433MHz up in the air. I’ll do a separate post about how it’s been working out on 144 and 433MHz and how I’ve been using it. However, this weekend was the first time I’ve used it in anger on 50MHz.Yesterday afternoon I noticed that 50MHz seemed to be open when I checked using the 70MHz vertical (which works on 50MHz too!). I swapped the V2000 over onto the FT-847. Over a period of a couple of hours I worked around 40 stations on 50MHz – exclusively on CW. Best DX was LZ1UQ in KN12 at around 2107km. Worked some new squares and some nice QSOs in general – and was pleased to note that the new vertical gave me a 2 or 3 S-point advantage over the old vertical (which has worked the US and Puerto Rico on 50MHz!).During the afternoon, I kept checking 70MHz and was very pleased to find LA6MV (JO59) calling CQ and even more pleased when he was able to hear me! I also heard LA4ANA (JO59) but didn’t work him. Heard the LA5VHF beacon from JO48 coming through as well. A little later, I also worked 9A2SB on 70MHz. This was using the 70MHz vertical.There was some Es around this morning (22nd May) as well, mostly the same stations that I worked yesterday on 50MHz, but made a couple of ‘new’ QSOs.The V2000 is noticeably quieter than the compromise antenna I’ve used before. It would be nice to have beams up for 50 and 70MHz, but given that my main interest is Es on those bands then the ‘vertical approach’ works out well. Incidentally, the picture makes the vertical look as if it’s very close to the power line… it’s not!