Solar Cycle 25 – Where Are We Headed? 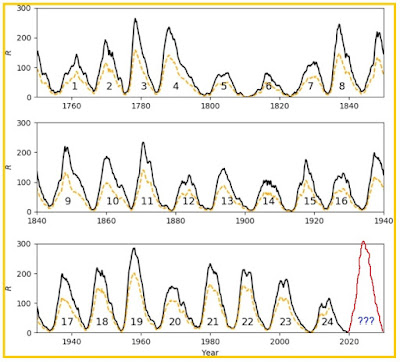 This coming week might be a significant one for the progress of Solar Cycle 25. Going forward, the next two months should give us a good indication of just exactly where our latest cycle is heading.

One way to gauge the growth of a cycle is by observing the radio energy it emits at 2800MHz (10.7cm).

This ‘solar flux’ value changes from day to day and from hour to hour, depending mainly on the number of sunspots and their level of activity.

The 2800MHz real-time solar flux units are published three times per day, after being measured at the Dominion Radio Astrophysical Observatory in Penticton, British Columbia. The ‘observed values’ are the actual measured levels while the ‘adjusted values’ reflect compensations for things such as the Sun-Earth distance, background sky noise, solar bursts, atmospheric absorption etc. Of the two values, the ‘adjusted value’ is more descriptive of the Sun’s true behaviour.

Although far from definitive, comparisons with previous cycles may shed some light on Cycle 25’s future. We should remember that almost all predictions from various solar physicists called for another very weak cycle, some saying even weaker than Cycle 24, the poorest in the past 100 years. Of the many predictions, one that varied substantially from the pack was one from Dr. Scott McIntosh’s team.

Their paper called for a very strong cycle, possibly the strongest one ever. We should know shortly which path our latest cycle will favor.

Let’s compare some of the things now known for sure about Cycle 25 with Cycle 19 (strongest ever recorded), Cycles 21, 22 and 23 (all strong, above average cycles that produced several winters of exciting 6m F2 propagation) and the recently-completed Cycle 24 (weakest in past 100 years).

A good indicator of a cycle’s possible future strength is the time that it takes to ramp-up and to really start building. Usually weaker cycles take much longer to do this so one way of looking at Cycle 25’s future might be to see how long it took each of these cycles to reach an adjusted solar flux value of 100.

Strong cycles are usually fast risers once growth is triggered. Most cycles start with flux values in the 60s and dither around for months or years with short surges into the 80s and 90s before dropping back again. A flux of 100 seems significant when looking at previous cycles as it is often the level where steady upward growth really begins, with fewer surges to a lower level.

The ‘grandaddy’ of them all. It began in April ‘54 and eventually peaked with a SSN (Smoothed Sunspot Number) of 285. The highest solar flux reached was 345. Cycle 19 took 14 months to hit a solar flux of 100, then dropped back to the 80s for several weeks before ramping up once again. This time it just kept growing. Both hemispheres of the Sun were at similar levels of activity resulting in a cycle with a very strong single peak.

Another strong cycle following a weak Cycle 20. It peaked with a SSN of 233 and produced a high flux level of 365.
Cycle 21 took 16 months to reach a solar flux of 100, dropping down to 70s and 80s for three months before taking off.

The third in a row of strong cycles but not as strong as the previous two. Cycle 23 reached a SSN of 180 and a flux high of 285 and like the others, produced a lot of exciting fireworks on 50MHz.
It took Cycle 23 just 3 months to reach a flux of 100 where it remained for a week before dropping back to the 70s and 80s for another 10 months. It repeated this 'surge to 100' pattern several times for 8 more months before taking off. Perhaps the original spurt at 3 months was flare-induced and a bit of an anomaly.

Our present cycle took just 12 months to reach a flux of 100, remaining above this level for 10 days with a peak value of 115 solar flux units. Dropping back below 100, it remained there for 10 months before this week's present climb back above 100.

This is where we are today, with the solar flux presently at 104, after climbing steadily for the past two weeks. This is an impressive  increase of 30 flux units during the past 27-day rotation period!

From the above comparison, Cycle 25’s early spurt to a flux level of 100 is very encouraging, while its 10 month sag shortly thereafter was a little discouraging for those expecting things to keep rising.

From looking at previous cycle behaviors, this should now be Cycle 25’s time to continue rising. If the cycle is to be a strong one, it will need to show some continued growth in the next few months. However, one thing seems almost certain ... we are not looking at a repeat of Cycle 24.

All cycles seem content to play in the 70-80 flux zone until triggered into steady upward growth. This triggering or ‘terminator’ event appears to be related to the final end of the previous sunspot cycle and more particularly, to the end of the Sun’s 22-year magnetic (Hale) cycle. The arrival of the terminator is a crucial component in the McIntosh papers and identifying its appearance is difficult, until it becomes obvious by a surge in cycle growth. This is the stage we are at presently.

Cycle 25’s original strong growth surge to well above 100 flux units, just 12 months after starting, had many wondering if this was indeed the terminator’s arrival ... but steady upward growth did not continue.

This week’s second surge past 100, has posed the question once again. If indeed this is the terminator’s arrival then we should see a continued increase in growth within the next 27-day solar rotation. If this transpires now, it would tend to indicate that Cycle 25 will be above average in strength. If flux values drop again for several months, this would not be a positive sign. For solar observers, the next two months will be of great interest.

The McIntosh et al. paper describes the relationship between the spacing of terminators and the magnitude of sunspot cycles. Their bold prediction relies on this relationship. Low amplitude cycles correspond to widely separated terminators while strong cycles have shorter separations.

The period between terminators (end of previous cycle’s activity) reflects this characteristic.
Monster Cycle 19 had a spacing of just 9.8 years (118 months), while weak Cycle 24 had a 12.8 year (154 months) wait for the terminator. The spacing for strong Cycles 21, 22 and 23 averaged 10.5 years.

The last terminator event was 10.75 years (129 months) ago so the urgency for an imminent arrival, signalling an above average cycle is evident.

One more look at the terminator arrival in terms of a cycle’s start time may also be of interest.

Cycle 19’s terminator event occurred in its 21 month. Cycle 21 waited for 24 months. Cycle 22 and Cycle 23 both waited 27 months, while weak Cycle 24 had a long wait of 37 months. The average wait for all strong cycles (including Cycle 19) is 24.75 months. Excluding Cycle 19 results in a 26 month average. So far, Cycle 25 has been waiting 21 months. This may be another positive indicator of a large cycle if the terminator arrives shortly.

Closely following the level of solar activity and more particularly the growth of a new solar cycle has always been a fascinating aspect of my radio activities. I’m also surprised at the number of hams who seem to take little interest or have little understanding of what is happening on the Sun that plays such a crucial role in the propagation of our signals.

I’ll be following the daily reports on the Sun’s growth carefully over the next few weeks. It's encouraging to see new sunspot regions forming quickly and today another new active area is rotating into view on the eastern (left side) limb. Can you find the new spot in today’s image?

Let’s all hope that Cycle 25 is about to ramp-up for real this time. If the flux remains above 100 going into the fall, we should see some nice transcontinental activity on 28MHz as was the case for Cycle 25's initial flirtation with a flux of 115 in the early winter of 2020. Hopefully the next few rotations will be very exciting!

Steve McDonald, VE7SL, is a regular contributor to AmateurRadio.com and writes from British Columbia, Canada. Contact him at ve7s[email protected].