This is a pretty simple modification that converts a SoftRock Ensemble RXTX SDR RF interface board from “common-IF” (RX and TX share the same antenna port) to “split-IF” (RX and TX have separate ports).  Split-IF is the standard for high-performance transverters on the 50-, (70-), 144-, 222-, and 432-MHz amateur bands.

So, I had a look at the RXTX schematics (here, here, and here) and considered the following options for where to break the RX and TX portions of radio: 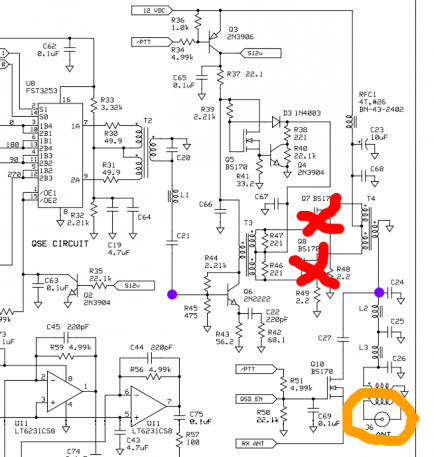 The purple dots were the first option.  Unfortunately, these locations on the actual printed circuit board were not easily accessible to miniature coax and this process would involve significant surgery to perform and restore the modification.  The second alternative I considered was the red Xs…jumpering over the BS170 PA transistors.  By this time, I was looking for a way to avoid butchering the original circuit too much.  So, I elected for option three, which was to install a second T/R switch at the antenna jack (golden circle).  This had at least two advantages, the first of which was being minimally invasive.  The big advantage, though, is that the radio could be operated at its design output and run through a fixed or step attenuator on the TX side to the transverter.  This meant that I would be assured of having a reasonably clean signal to work with if I configured the radio correctly.  It also meant that I could operate the radio as designed if I simply disabled the the second T/R switch and connected the antenna to the default port.

So, here is the modification that I came up with using parts I had in my junk box.  KB9YIG ships the Ensemble RXTX with a couple of spare BS170 FETs that can be used in place of the 2N7000.  I just had a lot of 2N7000s and thought I’d save the BS170s in case I ever burnt one in the RXTX. 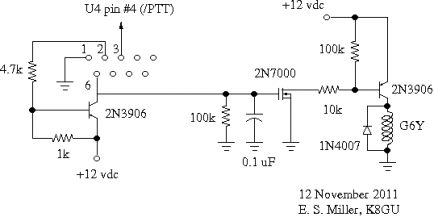 The interface to the transverter is through a DB9 connector.  PTT for this transverter is +12 volts (as done with the TS-930S) on pin 6.  Pin 1 is ground.  Pins 2 and 3 are shorted together in the transverter cable connector to enable the modification in the SoftRock.  The right portion of the schematic with the relay driver and Omron G6Y relay is based on the T/R switch from W1GHZ’s “Multiband Transverters for the Rover” that I decided not use on the microwaves when I found a cheap source of SMA coaxial relays.  An I2C decoder would be great to put band data on the other pins to select a transverter (or transverter cascade for the microwaves).

The whole mess works great from a switching standpoint.  When I key the PTT on Rocky or PowerSDR, it switches the TX line and keys the transverter.  I’m a little ambivalent about the quality of transmitted signal that’s actually coming out.  I think it’s good enough if you live in a sparsely-populated area, but I have a lot of VHF neighbors that I’d rather not upset.  So, I need to do some more testing on this—a lot of it is getting the RXTX and PowerSDR configured correctly.  It appears that the I/Q channels are flipped on my sound card (Audigy 2 ZS) between transmit and receive.  I don’t know if that’s a wiring error in my breakout box or whether it’s normal.  Spectra to come at some point…