12 December 2016 | by Mike AD5A  |  Share |  Tweet |  Leave a Comment (0)
I really enjoy CW, it's my preferred mode. However, it's not just the mode I enjoy, but the different tools of the trade. There are paddles, straight keys, bugs and the variations on the those themes, single lever, double lever, and then iterations within iterations of key and paddle design. Well, I enjoy all of them. I collect keys, paddles and bugs, but not just to look at, I love getting them on the air. I have a K3 which allows me to connect a straight key or bug into one plug and a paddle into another which allows me to switch seamlessly between a paddle and a bug or straight key. However, I wanted to have a straight key, maybe a couple of bugs, and paddle ready to go on demand and in addition a WinKeyer that interfaces with my contesting software that has to be plugged into the radio also. I needed a more efficient method of changing between the keys rather than  leaning over reaching down among the tangle of wires and cable, feeling for the plug before I could make the change.

I needed a switch, one that would allow me to select the key or paddle that I wanted to use. So I begin looking for a switch to suit my needs among ham equipment suppliers, but found nothing. I finally found a couple of schematics on the web to build my own and decided to take that path.

I was about to start ordering the parts when a friend of mine was visiting the shack. I told him about building the switch and his response was; "why do you want to that, you can a switch on EBay that will be relatively cheap and do the job". He told me I wasn't Googling with the right words. He suggested I try "3.5mm audio switch ". Who knew? Much to my surprise and delight several devices came up that would meet my needs. Here is the link to the one I bought. 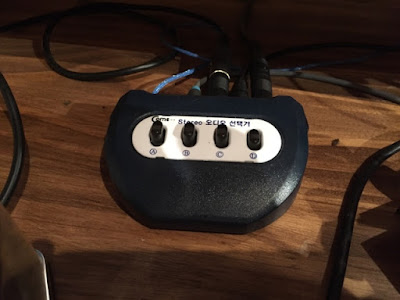 A cable with an 1/8" on one end (switchbox) and a 1/4" connector on the other, (K3 plug)  works for the K3. Simply connect the switch via the cable to the radio and then plug in your keys, paddle, etc. into the switch. As can be seen below I have a straight key, bug and Winkeyer plugged into the switch, while the paddle is plugged directly into the radio. I actually have an empty port in the switch where I usually have a second bug plugged in. You could actually get a second switch that would allow multiple paddles to be at your disposal as well.

So when I'm chatting with my CW buddies I can change my method of sending code with the push of a button. I can answer a CQ'er with a like kind instrument. An operator calling CQ with a bug, I can answer with a bug, etc.. This switching solution is very easy and very economical. There are 8 position switches available as well. 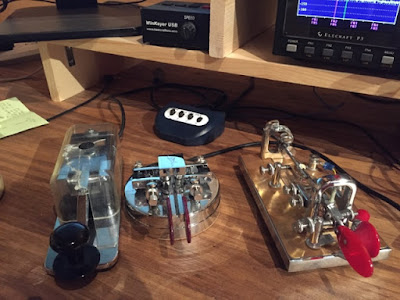