“One man’s signal is another man’s noise,” began Dr. Kudeki as he derived incoherent scatter radar theory from Nyquist’s noise theorem in ECE458.  I think of that statement often, whether it be QRM on the ham bands or sifting through the pocket litter of web users looking for their consumption preferences.

This morning, I admired just such an example of signal and noise while watching the NOAA Doppler weather radar.  Undesired targets of a radar that return echoes are termed “clutter” in the radar parlance and one simplistic way of eliminating clutter, especially when you expect the desired scatterers (“targets”) to move, is to assume that all of the stationary returns are clutter.  In the weather radar, we get clutter from all sorts of stationary things like trees, hills, and buildings.  Of course, what causes the clutter to move?

You see, it was one of those humid August mornings when a ham’s mind wanders to…tropospheric ducting.  Yes, indeed the clutter returns were moving, intensifying before and after sunrise.  I was fixated on this and watched the loop over and over again before noticing an even more interesting bit of clutter! 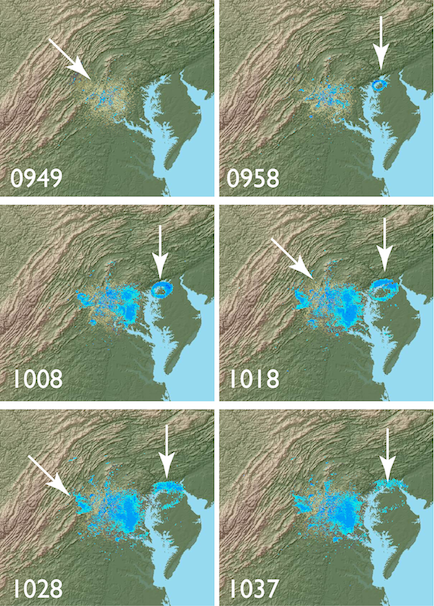 Beginning at 0958 UT on 4 August 2014, there is a small ring forming out over the Elk River area.  The ring, which is indicated by the downward-pointing vertical arrows, expanded over the next >40 minutes.  I was puzzled and watched the loop over and over.  I considered and discarded a number of theories before resorting to Google.  Apparently, it’s very likely a flock of birds.  Sure enough, the epicenter of the ring is Elk Neck State Park.  Fascinating.

The slanted arrows in the figure above indicates the ground clutter that I was originally noticing as a signature of tropo ducting, obviously now of secondary interest in this sequence of images!

Epilogue:  I sent these frames to my father, who is an avid observer of the natural world.  He passed them along to two friends back home who are birders.  At press time, one reported that he had learned of these “bird circles” from Greg Miller, another birder from the area who got famous as one of the subjects of the book (and movie of the same title) The Big Year.  I haven’t read/seen it, but I guess they went to Adak, which has a special place in my heart.  Anyhow, it’s a funny small and interesting world in which we live.