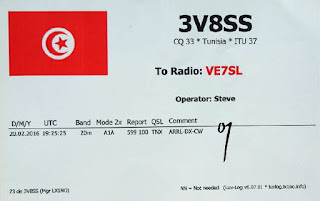 Confirmed DXCC entity #332 arrived in the mail last week. With a total of 339 active DXCC entities, this leaves just seven to go.


Although I had worked Tunisia a couple of years ago on 15m, I was never able to get the contact confirmed. In spite of sending an SAE and green stamps for postage, 3V8HQ's several promises of his card 'soon to be mailed', proved to be hollow.

The contact with 3V8HQ was my first and only one with Tunisia, since being licenced in 1963. The low level of ham radio activity from 3V8 combined with the challenges of VE7 to Meditteranean Africa propagation, made it a difficult one to work.

I was excited to see one other station becoming active this past year, club station 3V8SS ... but it seemed that whenever they were on (very early out on the west coast), they were on RTTY and not on CW. During the past recent ARRL CW DX test, I noticed that they were active ... a rare event and maybe another opportunity to work Tunisia on CW once again. As luck would have it, propagation was good enough to make the QSO, as my old (twice refurbished) Cushcraft A3S tribander came through once again.

My present confirmed list sitting at 332, combined with my 10 confirmed 'deleted' entities, brings the overall confirmed total to 342. The seven remaining entities will be very difficult, if not impossible, unless I live to be 150. They are:

A couple of these have been active in past recent years ... for some, I was asleep at the switch and for others, I was away travelling at the time. With solar conditions heading downhill quickly, and possibly staying there for many many years, the prospects of working these last seven is looking pretty bleak.

On the other hand, my favorite winter band (160m) should continue to improve. Last week also brought a new DXCC QSL for me on that band, A35T in Tonga, bringing my confirmed total on that band to 157.

Getting new entities from here on out will be increasingly challenging ... I guess I need to remember, that if it was easy, it just wouldn't be any fun! 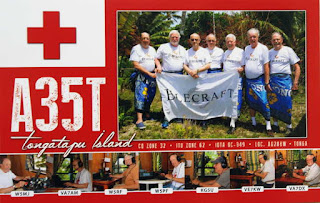 3 Responses to “Seven To Go”