Sending a message to Bletchley Park 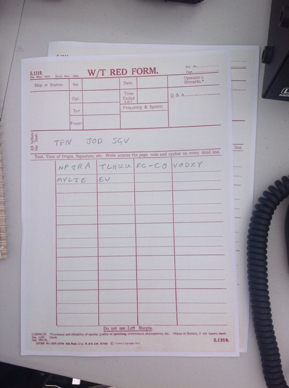 A couple of weeks ago when I was out for a walk I had a nice QSO with Giles, G0NXA who told me that the Cheltenham Amateur Radio Association were planning an interesting event in conjunction with the Milton Keynes Amateur Radio club as part of the Cheltenham Science Festival.

The plan was to establish a station in Imperial Gardens in Cheltenham where the public could write messages which would then be encrypted by an Enigma machine (owned by GCHQ!). The messages would then be sent to Bletchley Park using morse code. A special NOV was required for the messages to be sent in encrypted format.

At Bletchley Park, the messages would be received by members of the Milton Keynes radio club, where they would be transcribed and passed to the ‘Bombe Team’ who would try to decrypt the message using a replica of Alan Turing’s Bombe.

Decrypted messages would then be passed back to Cheltenham by Twitter.

This morning as I was going to the allotment, I worked the special event station in Cheltenham, GB5CSF and wished them well for the day. Then this afternoon, I was watching tweets from both Cheltenham and Milton Keynes clubs. Somewhat tongue in cheek, I asked if I could send a message to be encrypted, by Twitter. Very kindly, the Cheltenham team agreed.

I wasn’t sure what to send but settled on ‘LONGWORTH SENDS GREETINGS TO M-K’. I was later told this was one of the longer messages of the day!

I had a tweet back to say that the message had been successfully encrypted by the Enigma machine and was ready to be sent to Bletchley Park. I was able to see that the morse traffic between Cheltenham and Bletchley (GB5AMT and GB2BP respectively) was on 7.035 so I was fascinated to listen and copy the morse transmissions.

On Twitter, I saw that the Bletchley team had received the signals successfully and were collating them ready to be decrypted by the Bombe Team! Exciting.

After a very brief period of about 15 minutes, Bletchley tweeted the decrypts, including my message – to which they were kind enough to reciprocate the greetings! Fascinating and my very grateful thanks to everyone involved in the project for their efforts.

And of course, though it made for a fun afternoon, this was once very serious business. I remember with respect and admiration, teams of people, including Alan Turing who made this work when it really counted.

2 Responses to “Sending a message to Bletchley Park”