Following the launch of the eagerly awaited Funcube-1 (now also known by it’s official AMSAT designation of AO-73), I thought it would be fun to try and receive some telemetry from it.

At the time of writing, the satellite has just been switched into autonomous mode when it will switch between telemetry and the transponder automatically as described above. If that works out ok, it will stay in that mode.

To decode the telemetry, you need the Funcube Dashboard software, which you can download here

Setup is fairly easy, although is only currently available for the Windows platform and you’ll need the .Net 4 framework available on your PC. As I don’t have a Funcube Dongle Plus, I needed to use my Windows soundcard, connected to the FT847 via the usual G4ZLP interface. I had a slight false start when it didn’t seem to be selecting the soundcard, but that was easily resolved in File/Settings.

Then it’s just a question of setting Capture from Soundcard in the software and waiting for the satellite. My best antenna (given that I did not want to be outside waving the Elk antenna in the cold) was the V2000 collinear.

Fortunately, the first pass that I tried was quite a high one and I was able to receive quite a few good frames – some screenshots of which are shown below 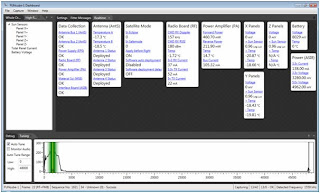 The satellite can also send ‘Fitter’ messages, uploaded by the ground station 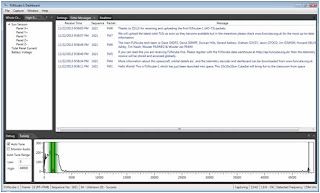 On each pass, even some of the lower ones, I have always decoded *some* telemetry, although not always that much!
Fun to get this going and congratulations to the Funcube-1 team for getting the satellite in flight and operational!
Tim Kirby, G4VXE, is a regular contributor to AmateurRadio.com and writes from Oxfordshire, England. Contact him at [email protected].