RAC contest and the new IC7610 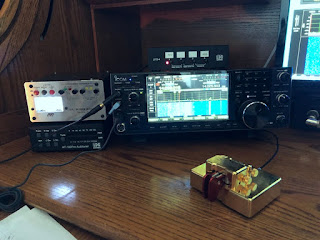 I was finally able to get on the radio and give the RAC contest about 2 hours and I had a blast with the new rig. I made only 32 contacts as the  Christmas season is a busy time of the year for all of us but Julie and I both agreed that the weekend after Christmas it was going to be a relaxing weekend. As always Murphy very briefly showed up in the shack. I tuned my MFJ 1788 loop to a great SWR of 1.3 using my MFJ antenna analyser. I then flipped it over to the IC7610 and the perfect match went to 3.0!! After some trouble shooting it turned out to be a short coax jumper between my antenna switch and the 7610. I replaced it with one I had on hand and all was good. As I thought about it I do
remember at one time there was an issue with one of my patch coax cables.....guess I never fixed or tossed it out.
I was thrilled with the Icom 7610 I didn't as of yet get the time to set up N1MM+ contest software so during  the contest I was old school with a paper and pencil. The audio was crisp and clean, I stayed with the 250Hz filter and had not even one issue with very close adjacent stations bothering my contact station. The touch screen is very responsive and an absolute joy to use. I took advantage of the 2 independent receivers, I turned on dual watch and had one VFO on an RAC station such as VE7RAC who was very popular and the other VFO I search and pounced. With one simple button push I muted the VE7RAC station and could unmute to check on the pileup. Once things slowed down I was able to put VE7RAC in the log.
Another feature I found very handy was as you spin the VFO faster your tuning steps increase so you can move up and down the band quickly. One issue I found was that as the shack got a bit darker the bottoms on the Icom are not illuminated. This being a new rig resulted in some incorrect push button selections.
Mike Weir, VE9KK, is a regular contributor to AmateurRadio.com and writes from New Brunswick, Canada. Contact him at [email protected].