When I returned from my operation as TI7/K2DBK in Costa Rica last summer, I didn’t receive any QSL cards immediately. I wasn’t very surprised by that, as I hadn’t worked all that many stations, Costa Rica isn’t a particularly rare entity, and I assumed that for the stations outside the US (where it’s a little less common), they’d be QSLing via the bureau or Logbook of The World. Since I had no cards that I needed to respond to, I focused my efforts on getting my operation approved for DXCC credit and getting a certificate so that I could upload the contacts to the Logbook of The World. As I wrote (here and here), that turned out to be an interesting challenge, but I was able to get that approval.

I didn’t really think about QSL cards after that until a few months ago, when I started receiving QSL requests via the ARRL DX bureau service. As I’ve written in the past, the bureau is a way to exchange QSL cards which, while inexpensive, can be quite slow, so lag of 6 or 8 months between the operation and the time to receive a card via the bureau isn’t terribly unusual. (Sometimes it can be much, much longer. I’m still receiving QSL cards via the bureau for my operation from Grand Cayman in 2007, and others for operations from home back to 2001. The bureau service itself isn’t quite that slow, but often folks like myself will discover after a few years that a particular card is needed.) When I first received those bureau cards, I realized that I had to create a QSL card but it wasn’t a high priority, as I wasn’t planning to send cards out via the bureau for at least a few months.

Things changed about a week ago when I received the first of several directly mailed QSL requests. Although it’s common to send a QSL card relatively soon after a contact, particularly if it’s sent “direct” (meaning mailed directly to the station, not via the bureau), sometimes stations will not realize until much later that they “need” the confirmation, or, as I’ve done, sometimes they simply forget at the time of the contact. Regardless of the delay, I have always made it a point to respond to direct QSL cards as soon as possible (normally I’ll send out a return card the day after I receive one). Unfortunately, I couldn’t do that because I still had the creation of the QSL card for my TI7/K2DBK on the “to do” list. The receipt of the handful of direct requests (all of which were from non-US stations) was the kick that I needed to get going designing my card. 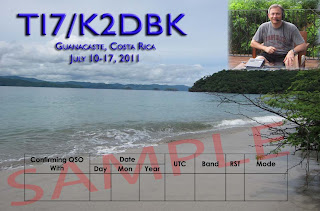 I’ve always designed and printed my “special” cards myself, because the number of cards that I typically need is usually so small that it’s not worth it to have them professionally printed. There are a number of tools that can be used for the actual design, but for me, the hardest part is always coming up with an attractive layout. However, I’ve come up with sort of a standard that I’ve used on multiple cards, and I try to follow that now for each new one I create. I’ve followed that “standard” for the latest card, which is to use a background image shot with one or sometimes two “inserts”, along with a QSO information block. I’ve always used my own photos, not a “stock” photo, as I think it makes the card more personal. I usually include a picture of myself on the cards because I think that makes it even more personal.

When I first started printing the cards, I though that I’d use a gloss “postcard” printer stock (like this from Staples), separate the postcards (they are set up for 4 on a page that have perforations to make separation easy) and just mail them. However, I realized that the size of each card was bigger than the standard QSL card size and I had trouble fitting them in some envelopes. As a result, I wind up using a paper cutter to trim the cards down to about 5.3″ x 3.5″. Most likely the next time I buy paper stock for my printer I’ll just use plain “everyday” inkjet photo paper since it should be a bit less expensive.

With a card designed, I printed off enough copies on my inkjet printer to respond to the direct requests, and I’ll be working on responding to the bureau cards next. I think that this particular design worked out really well, and the color of the sand on the beach is light enough so that I can just use a regular pen to fill in the QSO information in the information box and it’s quite readable.