I have operated most of the reverse beacon and weak signal modes but one that I have never tried is QRSS. “QRS” is the Morse Q code for “send slowly” so QRSS means send very slowly indeed. QRSS beacons send your call using very, very slow Morse, which listeners receive using a “grabber”, which is a slow moving waterfall display. If you’re lucky, they will email you a reception report, but you can also look for your signal yourself on one of the various online grabbers.

One day I planned to build my own QRSS beacon. When I found out that Hans Summers G0UPL had produced a QRSS beacon kit I was disappointed to learn that all the kits had been sold at the US Dayton hamfest. However I recently discovered that he had made a new batch of kits and not wanting to wait and find out they were all sold at the G-QRP Convention I ordered one at the weekend. The order process was extremely professional (amateur components suppliers who expect you to email your order and credit card details please note) and the kit arrived this morning.

I opened the envelope and was very impressed to find that the package included a printed copy of the instructions as I had expected to have to print them myself from the website. The PCB is of very high quality. But as I tipped the parts on to the workbench my heart immediately sank. 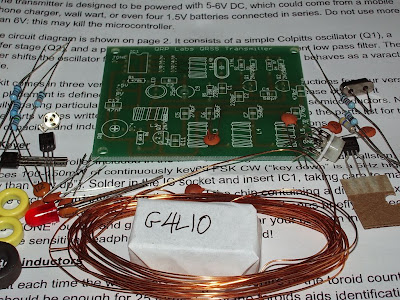 Because the microcontroller chip which keys the transmitter and has been preprogrammed with my callsign was wrapped in a slip of paper on which was written G4LIO, a transposition of my call that often afflicts people on the air as well – I don’t know why. The incorrect call was also written on the jiffy bag the kit came in. I checked the emailed copy of the order and the mistake was not mine.

After an exchange of emails with Hans I installed the chip in its socket, applied power and connected an earpiece to pin 2 which produces an audio tone to verify whether the chip had been programmed incorrectly. It sent G4LIO. 🙁 Why is it always me that gets the kits with the missing or faulty parts?