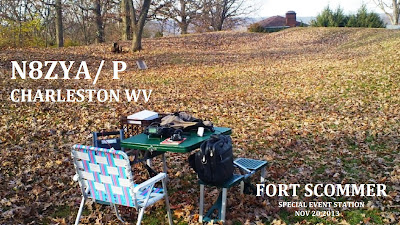 I had a great time working the “Special Event Station”  for the NAQCC WV Chapter of our national club on Wednesday afternoon. The event from the Fort Hill area of Charleston brought me 17 stations from the artillery position where both the 19th and 25th Presidents of the United States were stationed at one time during the Civil War.

It’s been called both Fort Scammon, Fort Scommer, and Fort White at different times, according to whomever was in control of the valley at the time. The Kanawha Valley was under the control of both Union and Confederate forces several times when salt production was the main business activity here. Salt was an important commodity for the preservation of meat during the war. 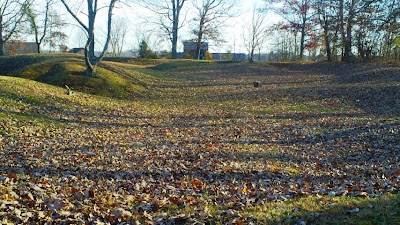 This high point overlooking the junction of the Kanawha and Elk Rivers was a good position for about a dozen cannons where it assured the control of both rivers.

I used the “paint” program to change the size of the picture and add my text to make this E-QSL card which I sent to the 17 stations I worked from noon till three in the afternoon from this site. It’s not well know in our town but the earthen structure is one of the highest points here and a decent radio spot for me to operate my QRP station for the event.

It wasn’t easy for me to set up here but it was a place close to home and the day was, I’m sure, one of the few before the snow flurries start to fly this weekend. 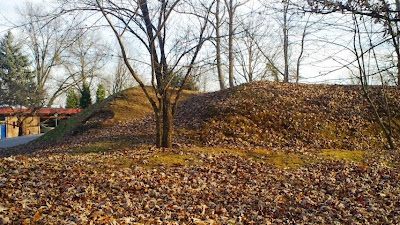 There were times when the weaker stations realized I was intentionally listening  on both sides of the designated frequencies of both 40 and 20 meters. I feel like a “rock star” when doing these events and am forced to draw out the weaker signals with this procedure. I can only imagine what a “big” pile up must be like with rare DX stations. I enjoyed being on the “other side of the coin” as I worked these stations with 4 watts of power and an “end” fed Zepp antenna.