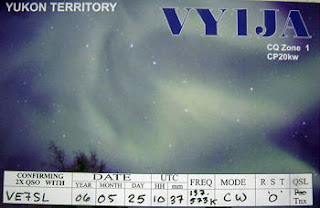 In the midst of this weekend's California QSO Party, I heard VY1JA calling CQ, looking for the Californians. It had been several years since I last heard VY1JA and the last time that we worked was on 137kHz on the 2200m band.

The CQs continued without much luck as the Californians just didn't appear to be hearing (or looking) to the north ... missing one of the rarest multipliers in North American contests.

Now, I had recently read that the VY1 station had been experimenting with remote operation, so that hard core, experienced contesters, could have the opportunity to hand out the rare 'NT' (Northern Territories) multiplier in future contests ... especially in the popular November ARRL Sweepstakes. I assumed that the station was likely being remotely operated.

After listening to a lot of CQ's going unanswered, I swung the beam towards Whitehorse and sent, "ur 599 down in VE7 land" and sent my call. Much to my surprise, it was my dear old friend 'J' himself, operating the station. What followed was a 10-minute catch-up on what he had been doing over the past few years and his plans for the future.

Since we had last worked on 2200m (we both had 'experimental licences at the time since 2200m was not yet an allocated ham band), J had retired ... un-retired for several years of contract work in the Arctic ... and ...re-retired once more, this time for good. With the help of some dedicated contesters, along with a 'gofundme' project on Facebook, J has been re-building his fine station from the ground up. Maybe you would also like to help. 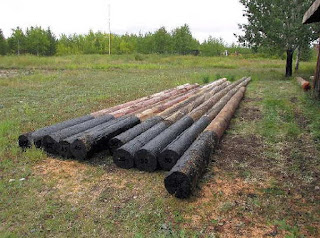 A few of the 20 poles, ranging from 70' to 30', that will be used to support V-beam legs and elevated groundplanes for the low bands.

I've saved the best news for last. J told me that he really wants to get going on 630m as well! His signal will be a wonderful addition to the band as he should be workable by most of the western provinces on nights of normal propagation. I am very much looking forward to working J again on the LF bands, recalling how strong his 100W signal could get during several of our early-morning 2200m CW ragchews.

Welcome back J!
Steve McDonald, VE7SL, is a regular contributor to AmateurRadio.com and writes from British Columbia, Canada. Contact him at [email protected].