Join us each Tuesday night at 8:00 CDT, 0100 UTC for the weekly AmateurLogic ‘Sound Check’ Net. 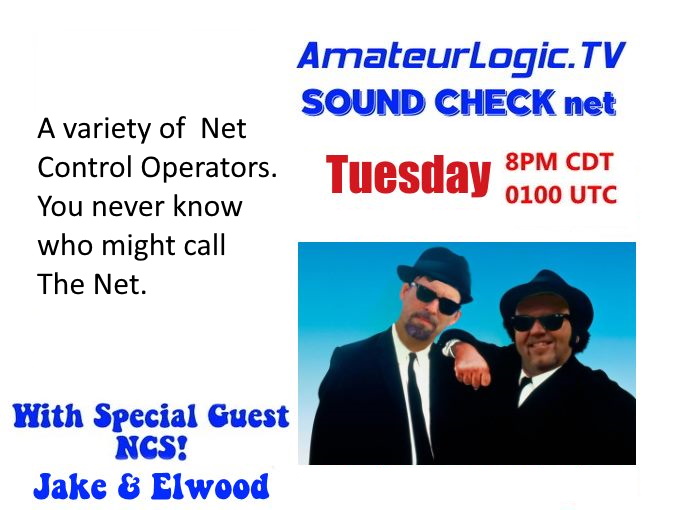 That one is unlike your usual nets. It’s a fun and very well connected net. Just pick a mode…

Or try more than one mode. Some participants check in using several modes. The current record is 5 modes.
Join in the fun this week!

Note: some modes subject to change. 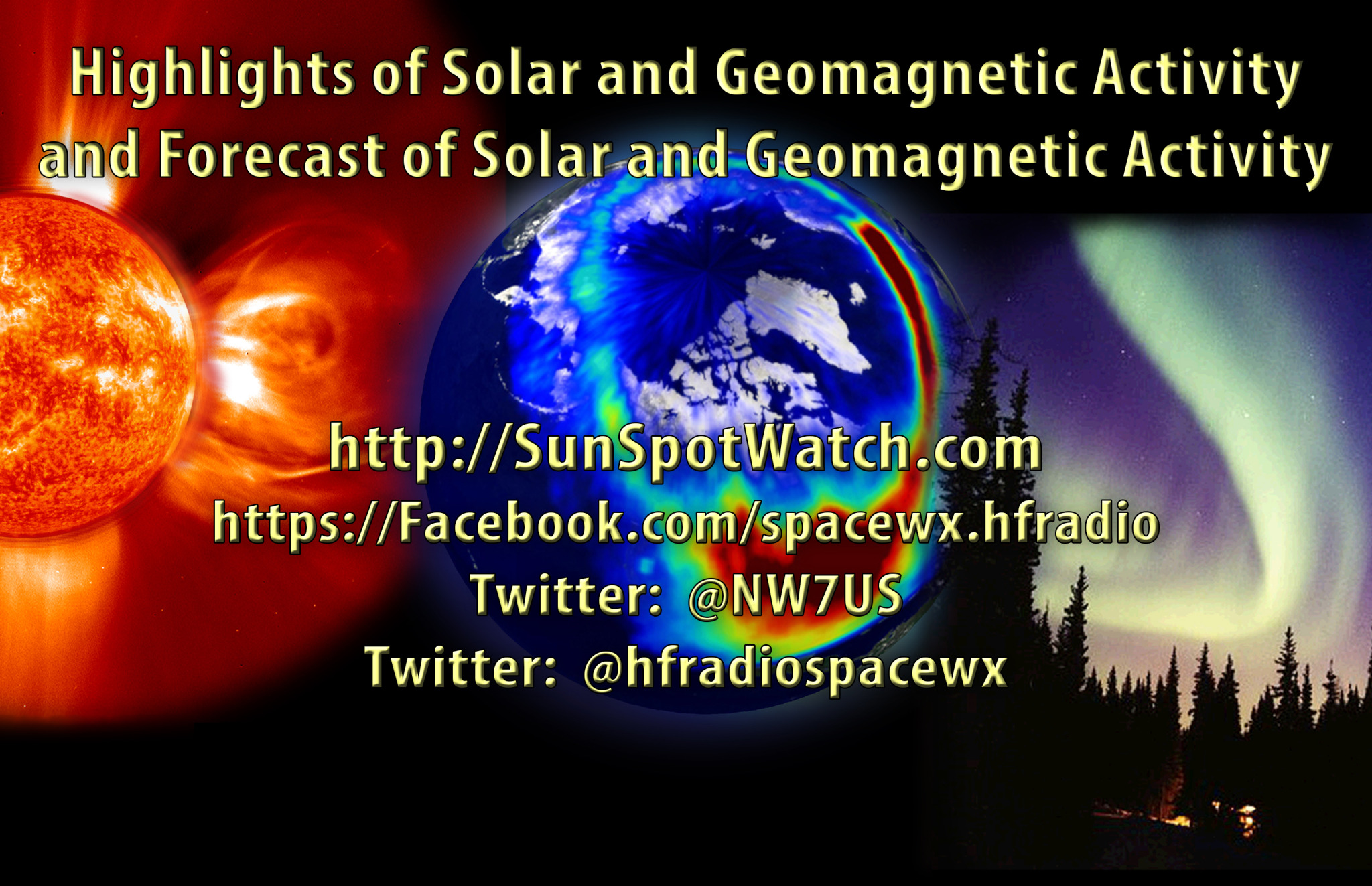 Solar activity was at very low levels throughout the period. Region 2765 (S24, L=116, class/area Cao/130 on 05 Jun) produced a B1 flare at 09/0311 UTC but was otherwise stable and unremarkable. No Earth-directed CMEs were observed in available imagery.

The greater than 2 MeV electron flux at geosynchronous orbit reached moderate levels throughout the reporting period.

Geomagnetic field activity was at mostly quiet levels with isolated unsettled intervals on 09-10 June due to CH HSS influence.

Solar activity is expected to be at very low levels.

The greater than 2 MeV electron flux at geosynchronous orbit is expected to be at normal to moderate levels.

Geomagnetic field activity is expected to be at quiet levels with unsettled conditions likely on 16-18 June and 04, 06-07 July due to recurrent CH HSS influence.

Be sure to subscribe to our space weather and propagation email group, on Groups.io

I am working on launching a YouTube channel overhaul, that includes series of videos about space weather, radio signal propagation, and more.

Additionally, I am working on improving the educational efforts via the email, Facebook, YouTube, Tumblr, and other activities.

Please consider becoming a Patron of these space weather and radio communications services, beginning with the YouTube channel:

There may be more than RF on your antenna! 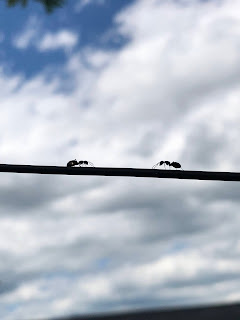 Yesterday late afternoon I had a chance to sit down and put my feet up on the patio. I was checking out the new QST on my Ipad with the sun coming in and out from the clouds. From my position, I have a clear view of my Endfed wire. As I was gazing at my Endfed and the nice clear sky something on my Endfed antenna caught my eye there was movement on the antenna!
As I got closer my antenna was very busy with black ants going back and forth on the antenna. I was shocked by the amount of activity the tree that supports my antenna does have lots of ants. I was curious where they were going and what all the excitement was about. The opposite end of the antenna is terminated at my shed. I saw them coming down the support pole, along the roof of my shed then onto a maple tree branch that was just touching the peak of my shed roof. Not sure what they were after but whatever it was it seemed it was worth the trip.
I did notice when ants met who were travelling in opposite directions they seemed to greet each other. After some reading (ants are fascinating) it was not so much of a greeting but more a checking each other out to see if they were from the same colony.......if not it would be a fight to the death! Sometimes there is more than just RF and SWR floating around on your antenna.
Mike Weir, VE9KK, is a regular contributor to AmateurRadio.com and writes from New Brunswick, Canada. Contact him at [email protected].

AmateurLogic 144: Does Anybody Really Know What Time It Is

It's time once again for The Weekender. This is our bi-weekly departure into the world of amateur radio contests, open source conventions, special events, listener challenges, hedonism and just plain fun. Thanks for listening and, if you happen to get a chance, feel free to call us or e-mail and send us some feedback. Tell us how we're doing. We'd love to hear from you.


Russ Woodman, K5TUX, co-hosts the Linux in the Ham Shack podcast which is available for download in both MP3 and OGG audio format. Contact him at [email protected].

Ham Radio on a Budget, Stay at Home Projects and Whatever Happened to 10 Meters?

Among many radio enthusiasts, there is a certain fascination with being able to directly receive images from space—whether from polar orbiters in low earth orbit or geostationary satellites thousands of miles overhead. Years ago, a working weather satellite image downlink station required hard to find dedicated hardware that represented a serious investment. Today, such costs have dropped significantly and most of the items used can be easily purchased. Cory gives us a glimpse of this fascinating aspect of satellite monitoring.

Weather Watching and Radio: A Natural Fit
By Georg Wiessala

I think it is probably fair to say that most amateur radio operators and radio enthusiasts also have a healthy interest in the changing weather. Next to radios and accessories, weather stations are among the most popular radio shack accessories. In his own shack, Georg has long been the owner of the Davis Vantage Vue model, which sits on the roof and transmits to an indoor console. And, with his scanner, for local weather data and information; shortwave radio for weather facsimile and NAVTEX broadcasts and a receiver tuned to coded weather information on long wave, he has access to a wealth of valuable current weather data.

100 Years of Radio Series: Celebrating the Young Heroes of Early Wireless, and Beyond
By Richard Fisher KI6SN

You can always tell when a technology becomes a cultural phenomenon; it’s where all the young people want to be. There was no more interesting topic or career opportunity than radio in 1920. Richard takes a look at the popular literature of the time in books and magazines that feature “boy heroes” (and a few girl heroes, too) whose understanding of wireless technology saves the day.

Ham Radio on a Budget—Get great gear for less than you might expect!
By Robert Gulley K4PKM

Anyone who has priced the latest 160 through 6-meter HF rig might be put off by the “kilo-buck plus” price tag, especially if you are a licensee who has recently upgraded to General Class. Robert has good news for you—there are a great many such rigs on the used market that are excellent performers with modern features often at less than half the price of a brand-new model. He shows you which models to look for and why as well as what to look for in a reseller. This is also good news for shortwave listeners who want superior reception performance not found in portables.

Two great accessories for your shack that will add some joy and operating pleasure are under review this month: The Geochron Clock and Inrad W1 amateur radio headphone/boom mic. The Geochron Clock/World Map was once a high-ticket mechanical contraption, but today’s version is basically a small computer that displays a world map with call sign prefixes, greyline indicator and much more. Mark also tests the INRAD W1 amateur radio headphone/boom mic that features over-the-ear cushions and a long mic cord.

Utility Planet
By Hugh Stegman
German Weather RTTY: A Blast from the Past

The Spectrum Monitor is available in PDF format which can be read on any desktop, laptop, iPad®, Kindle® Fire, or other device capable of opening a PDF file. Annual subscription is $24. Individual monthly issues are available for $3 each.


Ken Reitz, KS4ZR, is publisher and managing editor of The Spectrum Monitor. Contact him at [email protected].

The Future(s) of Amateur Radio

The Sutton & Cheam Radio Society in England invited me to give a talk via Zoom recently. The topic was the future of amateur radio. As a Sociologist and Statistician, I’ve commented frequently both in this blog and on the ICQ Podcast about how to “future” on a given topic. Social change is challenging to forecast in specific terms. But more importantly, knowledge of how to “future” can lead to changes in organizational aspects of the social fabric that gave rise to the present. A mouthful? Yes, but so is “The magnitude of the complex impedance is the ratio of the voltage amplitude to the current amplitude; The phase of the complex impedance is the phase shift by which the current lags the voltage.” (Source) And, we hams can follow that, right?

The ICQ Podcast decided to use the audio portion of that talk as the feature in Episode 326. The disadvantage that podcast listeners face is not having access to the slides that the Sutton & Cheam Society members were viewing as I spoke. I’ve included them here for those who wish to more fully follow my talk. A video of 10 seconds per slide is below. The future is for amateurs to help make. Your ham radio associations are a vital element of which “future” you choose to help make for there are many futures available!

This talk will be revised into a written version, launching a column on my companion website, foxmikehotel.com, under the Social Circuits tab. Understanding amateur radio must be approached for what it is, an organized social behavior focusing on the use of specific radio technologies. This periodic Social Circuits column will examine amateur radio as such.


Frank Howell, K4FMH, is a regular contributor to AmateurRadio.com and writes from Mississippi, USA. Contact him at [email protected].