I posted a few days ago that I was hoping to have a go at digipeating my 145MHz packet signal through the digipeater on the International Space Station. I got all the gear and software set up and then the digipeater seemed to be switched off.

In fact, I think it was switched off for very good reason, whilst the astronauts were space walking; repairing the pump and deploying the cameras (and then undeploying them again).

I set it all up yesterday, before we went out family visiting. Apart from the fact that I didn’t connect the aerial!

Today I was slightly better organised and left things running whilst Julie and I went out for a chilly, but sunny walk. I was pleased to find that I had copied a frame from IW3RGK when I got back.

The next pass looked promising, being pretty much directly overhead. I started to hear the signals as the spacecraft approached, around 300 miles away and got some decodes so I decided to press the transmit button. To my delight, I saw the digipeater repeat my position: you can see on the screenshot below from the UISS program. 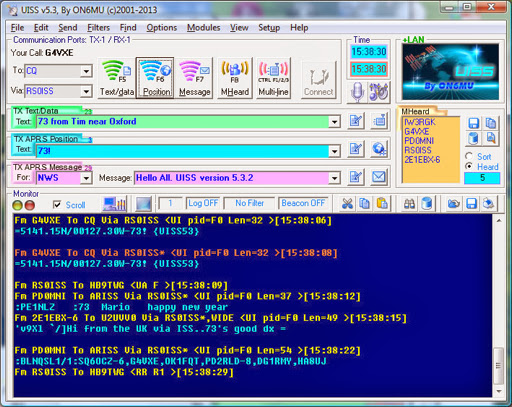 On transmit I was using the FT8900 to the V2000 collinear, so nothing too special. Although I am hearing quite a few packets on the pass, I only seem to be decoding the ones when the spacecraft is almost overhead – I suspect it’s the signal strength – or perhaps the doppler shift is messing with the Soundmodem decodes.