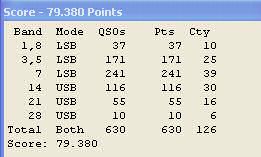 What can I tell. This contest was enervating. My XYL was not too happy with 24 hours of contesting. And I have to admit I wasn’t that much of use to her and my little daughter with only contesting in my mind. But I have to thank her that once in a year she let me go for a whole weekend to do my most important radio contest of the year. Luckely they were away to my mother-in-law at Saturday so I had no distractions. Propagation was bad on Saturday, it was improving Sunday. But of course Sunday I had some distractions, you can not totally ignore family live of course. Anyway I guess I missed some multipliers like VK, I actually didn’t hear VK on any band but know that there was some activity. No interesting DX this time like last year, you got to have some luck with that of course. I made a note from some calls and names from felow bloggers and readers so I could greet them with their names. But at the end I only worked PA1HHO Pleun,  I actually made a short but nice QSO with him on 80m so he tested his new “Rode” mike and let me hear the original mike so I could tell the difference. I made a 40m QSO with him as well. After all a interesting contest and I improved my score from last year, actually broke the 600 QSO barrier. Side effect after the contest, extreme tiredness and a headache.

Most interesting DX:
10m: VU2XO (India), PU2LEP (Brazil, long path!), RK9QWM (Asiatic Russia)
15m: K3ZO (USA), VO1BBN (Canada),  PY5PDC (Brazil)
20m: N8II (USA), VO1BBN (Canada)
80m: VO1BBN (Canada)
I didn’t even hear USA or Canada on 40m this year. Although I’ve been calling CQ on 40m at the right time there were only European stations that replied. There was a Brazilian station active on 40m but I couldn’t hear him. Propagation can be very local sometimes. The only advantage I have on the low bands is that I haven’t got tht much QRM. Although there were 2 stations that I had to let go as I couldn’t get their calls no matter what I tried. That was almost also the cause with some stations that were almost eating their mikes, it makes them very hard to understand although I guess they thought they had more power that way :-). Another thing I did this year was repeating the progressive number, just to check and improve my error logging. I hope the error rate has been improved that way. And I finally had a second screen with cluster information on another desk, it did get me some multipliers. Although my analysing program thinks that I had second radio that was not the case. The nice thing of N1MM is you can type in the frequency in the logging field and you go there instantly. When the QSO is made you just jump back to your CQ frequency with ALT+Q and run again. N1MM is great software for contests, unfortenately it’s not always without bugs. This time I couldn’t see the worked stations in the 40m bandmap. On other bands there were no problems.
Well, I thought I would write a short story about the PACC 2012, but after all….
The button below links to the great SH5 analysing tool