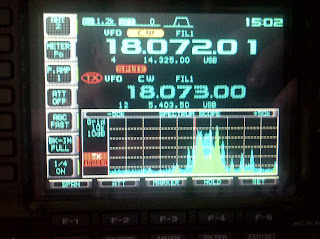 Now that the PJ operations have been underway for a while, you’d think that the pileups would have started to die down a bit. In some cases they have, but I was kind of surprised to see how big some of them remained. I guess it varies depending on band, propagation, and where you’re located, but this morning I saw PJ2T spotted on 17m CW and I figured I’d give him a call. He nice and loud, but he had a huge pileup. This is what my bandscope looked like.

By way of explanation, what you’re seeing is that I was tuned to 18.07201 MHz, which was where PJ2T was transmitting. I was set to call him split on 18.073Mhz. The big pile of green and light blue on the scale represents the other stations that are calling him. The scope was configured so that each white vertical line represents 10KHz of space. What you can see is that the callers for PJ2T were spread out over around 20Khz of space. Those of you who are DXers will appreciate how big that is, but normally for a “routine” DX operation you might see callers spread out to 2, 3, or maybe 5KHz. It’s only when a really “rare one” comes on that you typically see something like this. (Hence my reference to P5, North Korea, in the subject.) Oh, and keep in mind that these are only the callers that my radio can hear. Imagine what it must sound like on his end? I do want to say that the operator is doing a terrific job.

As a reminder, I’ve been collecting web sites and other internet presence information for the PJ DX operations on a special page here.