Out on the fells with Murphy

This morning there was a lot of Sporadic-E about. I spotted – and was spotted by – several stations on 10 metres. I didn’t hear any normal activity on 10, but there was some on 6m and I made a couple of contacts. However the weather was gorgeous, too good to be indoors whatever the propagation, so I took some coffee, a sandwich, the Motorola GP300 and the Intek H-520 Plus and set off to do a couple of Wainwrights. 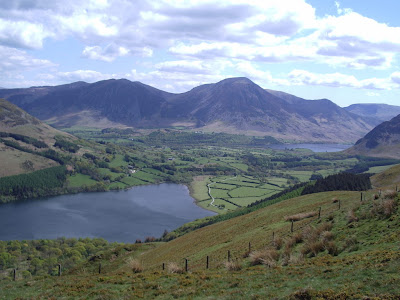 I parked in a lane between Mockerkin and Lamplugh and walked along the track above Hudson Place. You are high above Loweswater here and can enjoy some wonderful views for no climbing effort at all. Then it was up over the grassy fellside to Blake Fell (WOTA LDW-140.)

There was a strong, cold south westerly wind so I hunkered down in the stone wind break on the summit to have my lunch. A retired couple over from Newcastle joined me and wanted to chat, so it was not until they had gone that I was able to get the radios out. I put the telescopic 5/8 antenna on the GP300 but the wind was so strong it was blowing it almost horizontal so I switched to the helical. I was using the speaker mic, but no-one replied to my calls and I realized that the rig was not going to transmit. That was the first of my troubles.

Dispensing with the speaker mic I called CQ and made contact with Keith G0EMM in Workington. After we moved down to 145.450MHz we were joined by Colin 2E0XSD and Derek 2E0MIX.

The guys knew I had recently acquired a 10m FM H-520 hand held and anticipated that I would want to try using it. I decided it was too windy to try the 4 foot antenna so I used instead the short one that came with the rig. As soon as I pressed the PTT the rig shut down and re-started. Keith suggested there might be something wrong with the batteries, and that seemed to be the case as when I reduced power to 1 watt the rig didn’t shut down but the battery state indicator went from all bars to no bars. So that was the second of my troubles.

As per usual, I had my digital camera with me to try to take a picture, using the self timer, of me at the summit. But either I got only my legs, or only my head, or the wind moved the camera so the picture was blurred. After that, every picture I took with the timer was grossly over-exposed (although if I took a picture manually it was alright.) That was the third of my troubles, as a consequence of which you are spared a picture of G4ILO this post.

After that I set off for what I thought was Burnbank Fell (WOTA LDW-183). My target was a prominent summit with a large stone summit cairn, about 100m lower than Blake Fell. I reached it in about 20 minutes, put out another CQ call and was contacted by Keith and Colin. They had been tracking my position using APRS and informed me that it looked as if I was on Carling Knott. I was sure I wasn’t, as there is no other Wainwright summit in the area. Carling Knott isn’t a Wainwright, and the one I was on looked like a pretty important top that I’m sure Wainwright would have given a page in his Guide to the Western Fells.

I had hoped to descend from there down to the lake but I couldn’t find the path – the fourth of my troubles – so I ended up re-tracing my steps, though avoiding the actual summits to save a bit of climbing. As I walked back over the grassy hill over which I had walked a couple of hours earlier I put out another call on 2m and was answered by Keith and Colin again, who both confirmed that my APRS position now put me on Burnbank Fell! So this featureless grassy hillock that I had barely noticed on the way up is actually a Wainwright, while the higher Carling Knott with its impressive summit cairn isn’t. I’m sure AW had his reasons…

Back at the shack I found there was nothing wrong with the H-520’s batteries, but it doesn’t seem to like the short whip antenna, which of course I never tested it with before I went out. If I had been able to use the four footer it would probably have been fine. The GP300 worked perfectly with the speaker mic, and I couldn’t reproduce the problem with the camera self-timer either. As for activating the wrong fell – I guess I should look at the map a bit more closely.

But it was still a gorgeous day and a wonderful walk, even if it was a bit windy and Murphy was my invisible companion.