One of those QSOs….in a good way! 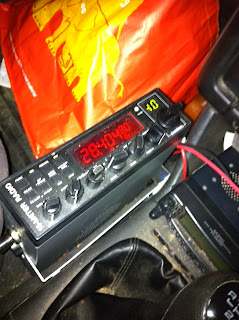 I’ve mentioned before that some contacts really grab your imagination. This evening was one of those. Generally, over the last few weeks 10m has been closed by the time I have got to the car on the way home from work. However, this evening, when I switched on the 10m rig I could hear a station close to 28.400MHz where the rig was ‘parked’. As I drove over to the supermarket, I could hear W8ERN in Michigan working his way through a steady stream of callers. Driving through urban Didcot is quite noisy on HF, so I hadn’t really expected to hear any more on 10m by the time I had finished my shopping for a Valentine’s meal for Julie.

But as I drove away from the supermarket, with goodies in my shopping bag, I switched on the 10m rig and he was still there, if anything, stronger! To my surprise, Angelo, W8ERN heard ‘mobile’ as someone else called him and asked for the mobile. I called and was thrilled to get a 5/8 report from him.

We had a very easy QSO and I was able to explain that I was running around 10W from the Anytone AT-5555 to a CB whip on the car. Angelo told me about his website and I told him about this one!

Great to make my first inter-continental QSO from the car on 10m with the Anytone rig! Thanks Angelo!

One Response to “One of those QSOs….in a good way!”