20 August 2014 | by Steve VE7SL  |  Share |  Tweet |  Leave a Comment (0)
Researching suitable LEDs for our lightwave project forced me, once again, to the bottom of the learning curve. Like the variety of photodiodes being used in simple lightwave systems, there were a myriad of LEDs experimentally lighting up the skies both in the UK and in the U.S.

It seemed that the present flavor-of-the-day in terms of LEDs was the Luxeon III, a 3W / 1.4A device being produced by Phillips.....or rather.....was being produced. Apparently our new found interest in lightwave communications had been coincidental with the retirement of this popular LED and all stock had been depleted! Although still available in some wavelengths, there were none in the desired 'deep red' portion of the spectrum that we had chosen for our system.

All was not lost however as a 'replacement', largely untested by the lightwave community, spec'd-out at a lower power but with a somewhat more efficient design. The new device was the Luxeon 'Red Rebel' and rated at 700ma. ....apparently no slouch at all.


I had also been watching the various offerings available on e-bay which provided a number of tantalizingly inexpensive options. Many of the LEDs from China appeared to offer good promise and may well be good performers, but most appeared to be lower-quality knock-offs of the name-brand models.

These higher-powered LEDs, on close examination, usually contained two or more separate LED die behind the lens. A single light source is required to achieve maximum focusing / lens illumination efficiency and although tempting, should probably be avoided. 'Safe' names to look for include Philips, Osram and Luminus and often, bargains can be found on e-bay when NOS is being disposed of.
﻿﻿ 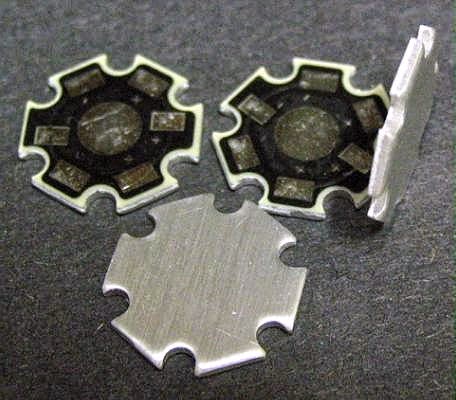 Like most 'power' LEDs, the Rebel needs to be mounted on a heatsink otherwise catastrophic destruction would be immediate. The usual method of heatsinking is to attach the LED (by solder or adhesive) to a copper star-shaped interface which is then fastened to a small heatsink.

﻿
The interfaces can be purchased separately but soldering the LED can be challenging without overheating it. They can also be fastened with JB Weld and enough pressure to ensure a firm bond without damaging the LED. An easier alternative is to procure the LED already mounted on the interface as shown here.


Once adequately heat-sunk, voltage can be applied to the LED after taking measures to limit the current to safe levels. Although these LEDs are very small, they emit an exceptionally bright light and must be treated with care. The Rebel is shown here, shortly after first applying voltage. The current in this test was just 100ma. Although they are rated at 700ma, I have run this one up to 1A without failure but it is normally run at the rated current.

The next task was to tackle the 'antenna' which, in a lightwave system, is the lens. Many of the UK amateurs were having good results with inexpensive 4"-5" magnifiers mounted inside ABS or PVC tubing. The remainder, and those in the U.S., were using plastic Fresnel lenses mounted in homebuilt plywood boxes of various designs. Clint's (KA7OEI) website contains a vast amount of valuable hands-on info describing the latter and we chose to go via that route.

Like the large variety of both photodiode and LED selections, fresnels were no different. Once again there was a lot of information to digest while learning about the various types. Eventually, John, Markus and myself each purchased two plastic fresnel lenses from 3DLens in Taiwan. One would be used in the receiver box while the other was for the transmitter. These were 26cm square lenses, model A260.

Unfortunately I no longer see these particular lenses being offered....hopefully it is only a momentary depletion of stock. There are many different sizes and types of fresnels out there....some if them perfect for this type of use and others not so good, so think carefully before buying anything and know what you are getting. Studying Clint's pages regarding fresnels will help immensely.

Things to pay attention to are the focal length and groove 'pitch'. For a typical 10"-12" lens, look for something around 10-12" focal length, otherwise the mounting enclosure will get too deep and awkward to handle. Front surface 'groove pitch' should not be too fine...something around .5mm is good but our finer (.2mm) seemed to work well also.

Now that the LED had been mounted and the fresnel lenses were in hand, the next task would involve the focusing mechanism and alignment. Thankfully John had devised a smart method for mounting and adjusting focus a few weeks earlier, when we were still working on receivers.....
Steve McDonald, VE7SL, is a regular contributor to AmateurRadio.com and writes from British Columbia, Canada. Contact him at [email protected].