Some years ago I had this annoying noise that made listening for weak signals on several of the shortwave radio bands virtually impossible. In the end I was finally able to track down the noise source: Our beautiful Danish Herstal designer lamps in the kitchen. Actually it wasn’t the lamps themselves, but the dimmable switch mode power supply that came with them.

After some years of always having to remember to turn them off, in the end I just replaced the original noisy dimmer with a fixed voltage, noiseless, electronic transformer and inserted lower wattage 12 V light bulbs in the two lamps.

The original dimmer came in its own nice conical designer housing and inside one finds a more ordinary plastic housing. And of course it is marked with the CE mark, thus indicating that it should be fine with respect to noise. 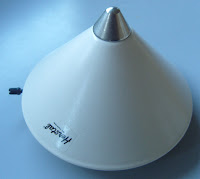 But as I kept opening it up, I finally found the printed circuit board. Interestingly, there are several components which have just been bypassed with wires. The most important one must be the one to the left of the center hole. Here two wires have replaced a component connected more or less directly to the 230 V AC input.

I believe this is a common mode filter. These filters hardly serve any purpose when it comes to the function of the dimmer. But they are vital for ensuring that the dimmer does not radiate noise on the power line, and probably also for achieving the CE mark.

I think the manufacturer, Herstal, may have cut some corners here in order to save cost. They seem to have fallen for the temptation to remove this filter component after it initially had been designed in.

Who at Herstal who made that decision, I can only speculate about. But since the filter initially was there, I think that it was someone other than the design engineers.