The object on the left of the picture is a 9600mAh external back-up battery for MP3 players, mobile phones and other 5V devices. I bought it on eBay (where else?) for $55.99 including shipping with the intention of using it to power my HTC Touch Pro smartphone so that it could run all day using GPS and internet connected apps like the APRS client APRSISCE. Previously I hadn’t been able to make much use of such applications when out and about on foot because if I was away from a power supply for more than a couple of hours the end result was a dead battery and a phone that could not be used to make phone calls. 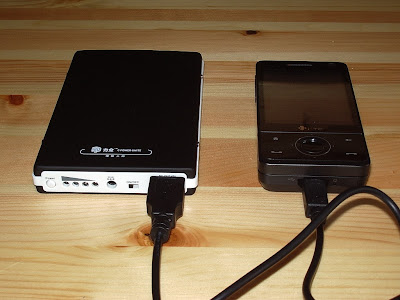 The product arrived after a couple of weeks wait rather poorly packed in a jiffy bag containing the battery back-up unit, a 5V USB charger with the usual two-prong fold-out mains plug, and a USB cable with coiled lead and interchangeable power connectors. There was no box, nor any instructions so I had to figure things out for myself. Clearly the DC IN port was meant for the charger, the USB socket marked DC OUT was the output and the slide switch next to it turned the output on and off. The four LEDs showed the battery state for a few seconds after the POWER button to the left of it was pressed, and the charging state whilst charging.

There was no cable for charging, so I presumed I had to use the USB lead supplied for output and one of the interchangeable connectors. One of them did fit, though not very well, poorly enough in fact that it pulled out of the socket if there was the slightest tension on the coiled cable.

I started charging the power pack. Two lights lit up on the charger and the charge status showed two of the four LEDs lit. Next time I looked at it all the LEDs were off. Surely the batteries could not have charged so quickly? Eventually I measured the output from the charger and found it was about 0.25V. Clearly the charger had failed.

I sent an email to the eBay seller who was anxious enough about the possibility of receiving negative feedback to immediately promise to send a replacement. Meanwhile I found that the charger which came with my HTC phone had a USB output so I charged the battery pack with that. With hindsight that was rather foolhardy and I ought to have attempted to measure the current drawn first, but I got away with it. Though rated at 1.0 Amp output the HTC charger got fairly warm, but eventually the charge level reached full and the charger got cold again so I assume that it finished charging and the pack was fully charged.

The charger that came with the battery pack is labelled as an “MP3 Power Supply” and the output is rated at: DC 200mA +/- 30mA. Even the 1500mAh battery in the little Baofeng radio takes more than 400mA on charge. I managed to find a cable that would enable me to charge the battery pack from my workbench variable metered power supply and even when the battery pack is only half discharged it is drawing a current of almost 800mA. So I think the charger supplied simply blew up! I’m just hoping the eBay seller will provide a more adequate charger as a replacement. Sure, I can use my existing HTC phone charger. It may even be more convenient than having separate chargers for the two devices. But it would be nice to receive what one paid for.

By the way, if you ever wondered what is inside those Chinese wall-wart power supplies, how come they are so light, here are some pictures of the innards of the one that failed. 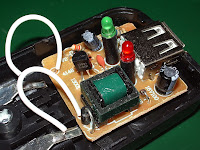 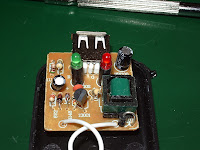 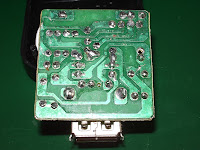 The answer, it seems, is not much. Call me old fashioned, but I’m just a bit apprehensive about having just a handful of components between my equipment and the 230V mains!

It’s a pity that this problem has occurred because I would have liked to have been able to recommend this battery pack to other users of APRSISCE on Windows Mobile. My initial test on the workbench suggest that this battery pack is more than capable of powering the phone with GPS and mobile data connection active during a day’s outing. The battery pack itself seems well made and I would guess that it is probably supplied by its Chinese manufacturer in a nice box with instructions and an adequately rated charger. The trouble in this case would seem to be caused by a cheapskate eBay seller.